Charting the Territories goes Between the Sheets!

As a supplement to my appearance on Episode #272 of the Between the Sheets podcast (you can check out all their episodes at betweenthesheetspod.com), I decided to "chart" some of the territories discussed during the show.

Between the Sheets, hosted by Kris Zellner and David Bixenspan, is a weekly podcast that looks at how a given week in professional wrestling history was covered by the wrestling media, primarily in the "dirt sheet" newsletters (their words, not mine!).

We looked at a 12-day period in October 1987, discussing all the major news in the world of wrestling, including coverage of most of the remaining U.S. territories. I thought it would be interesting to come up with SPOT Ratings and FEUD Scores for some of these territories to add further insight into what we talked about on the podcast.

Let's start with the AWA. Here are the SPOT Ratings and FEUD Scores for the AWA for the week ending 10/18/87. 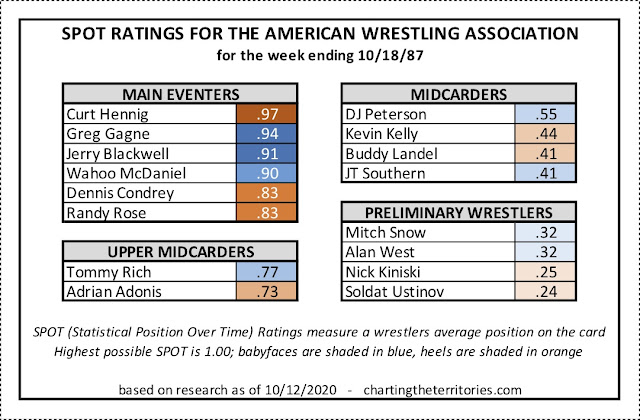 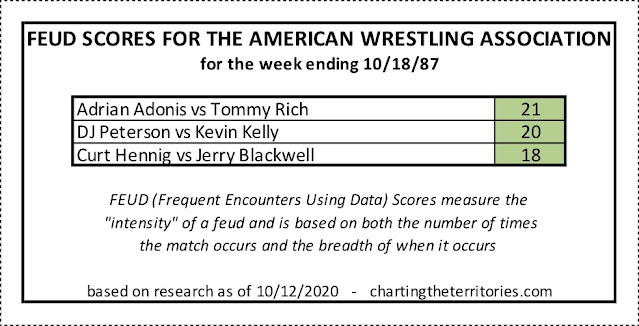 NOTES:
The top three heels are Curt Hennig and the Paul E. Dangerously-managed duo of The (Original) Midnight Express, Dennis Condrey & Randy Rose. The top three babyfaces are Greg Gagne, Jerry "Crusher" Blackwell and Wahoo McDaniel. The matches at the top of the cards around this time generally feature Hennig against one of the three main event babyfaces and the Midnights vs the other two, plus occasional six-man tags with the Midnights teaming with Hennig or another heel. The "biggest" feud, as measured by our FEUD Scores, is between Adrian Adonis and Tommy Rich, both of whom are slotted in the upper mid-carders based on SPOT Ratings.
While Buddy Landel shows up in the SPOT Ratings, keep in mind that these numbers are calculated based on the advertised cards. As discussed on the podcast, Buddy wrestled on one card for the AWA around this time (in Las Vegas) and then appears to have no-showed the other cards he was advertised on (or perhaps he was injured). Dick Slater, who had just finished up a tour of Japan after leaving the WWF over the summer, is inserted into the spot originally planned for Buddy.
With Boris Zhukov abruptly leaving the territory to go to the WWF, it leaves his former tag team partner, Soldat Ustinov, hanging in the lurch. Ustinov is moved down the cards while they focus on pushing the Midnights as the top heel tag team.
-----
Now let's look at the "Memphis" wrestling territory, which of course included other cities in the region, including Louisville, Nashville, Evansville and towns in northwest Mississippi and northeastern Arkansas. 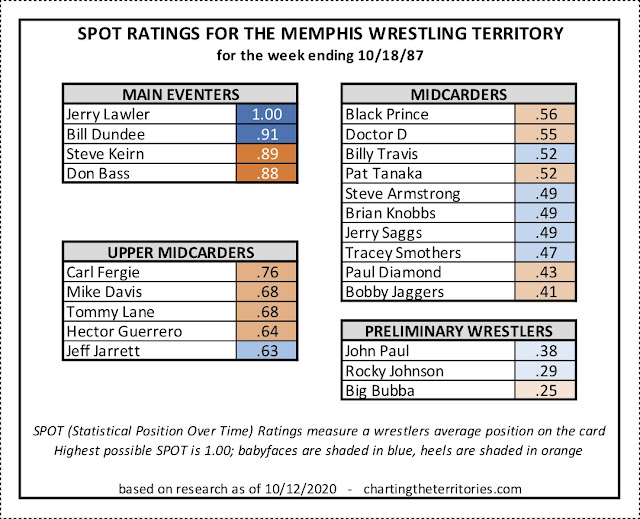 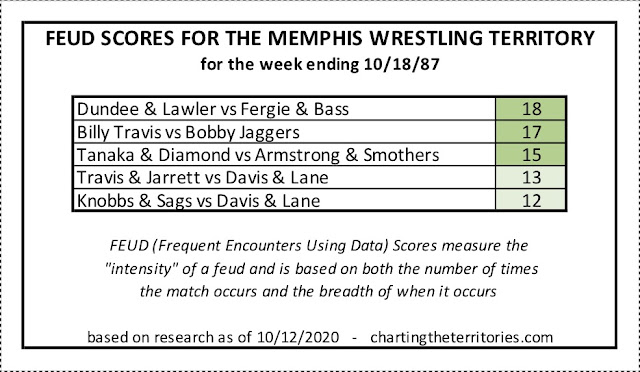 NOTES:
Jerry Lawler and Bill Dundee sit atop the SPOT Ratings, followed by a freshly-turned-heel Steve Keirn and heels Don Bass & Carl Fergie. The territory features a number of tag teams, as happened frequently in Memphis over the years.
As mentioned in the podcast, the Rock & Roll RPMs (Mike Davis & Tommy Lane) had just regained the Southern Tag Team titles from the Nasty Boys (Brian Knobbs & Jerry Saggs) and the Nasties were "shoved down the cards". We see evidence of this in the SPOT Ratings, as the RPMs are listed as Upper Mid-Carders while the Nasties are further down the cards in the Mid-Carder category.
The territory was so focused on tag teams at this time that the main singles champ in the territory, Bobby Jaggers, is not only slotted as a Mid-Carder, but he's at the very bottom end of that category (Mid-Carders have SPOT Ratings between .40 and .60). With Lawler & Dundee focusing on defending the AWA World Tag Team titles that they had just won, Jaggers would be built up for an eventual feud with Lawler for the title.
It's also interesting to note Rocky Johnson slotted as a Preliminary wrestler here. As Kris Zellner discussed on the podcast, Rocky wasn't a "pushed entity" on TV and was just working house shows. This seems to have been Johnson's last year as a true full-time wrestler (based on his match listings at wrestlingdata.com). In a March 2004 interview with Nashville newspaper The Tennessean, Rocky's son Dwayne (you may have heard of him!) recalled living in "seedy Murfreesboro Road motels" in Nashville with his parents during this time.
---
Finally, let's look at the "Portland" wrestling territory, which is also referred to as the Pacific Northwest territory. 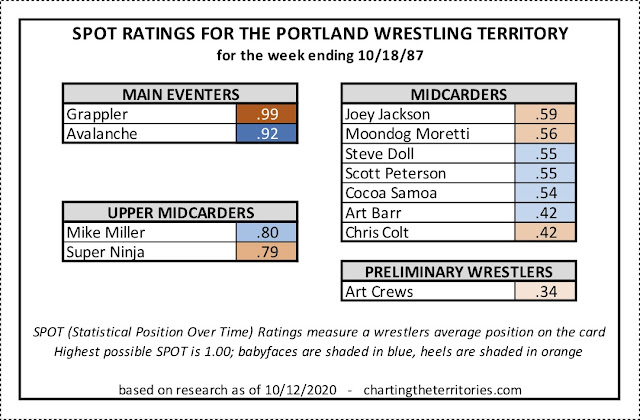 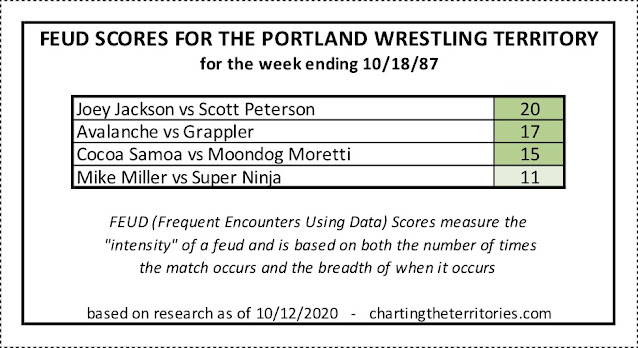 The main eventers at this time were heel The Grappler (Lynn Denton) and babyface The Avalanche (Paul Neu, the future P.N. News). They were feuding with one another in singles bouts and also occaaional tag matches with Avalanche teaming with Mike Miller and Grappler teaming with Super Ninja (Shunji Takano).
Further down the cards is rookie Art Barr, who had just turned 21 in early October. As mentioned on the podcast, a future tag team partner of Art's, then 20-year old Eddy Guerrero, was already getting rave reviews around this time for his matches in Mexico City. Getting strong reviews here was the series of matches between Joey Jackson and Scott Peterson. In addition to having good matches, they were having lots of them, as their feud has the highest FEUD Score in the territory.
-----
Between the Sheets comes out every Monday and is a very deep (they're usually several hours long!) look at wrestling history.