- September 21, 2020
In September 1972, the tag team title situation is cleared up, Tarzan Tyler swings his way up the cards & more!
Here are the SPOT Ratings for the month. 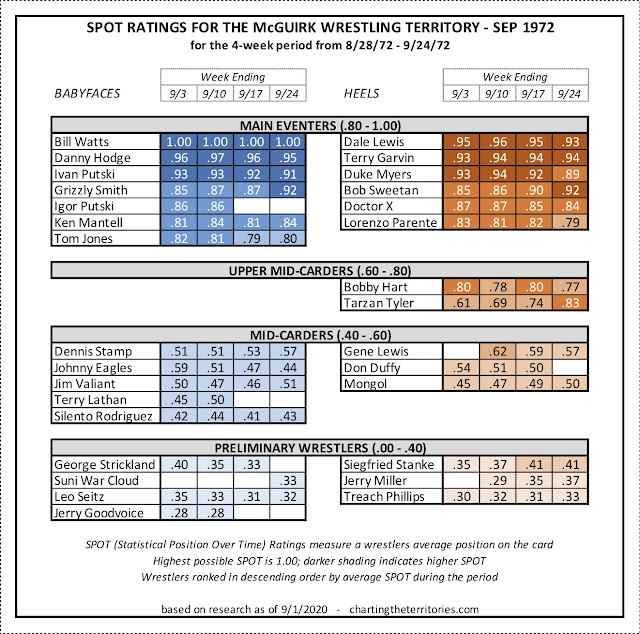 COMINGS AND GOINGS
Newcomers to the territory this month are babyface Suni War Cloud and heels Gene Lewis and Jerry Miller.
A few different wrestlers used the name Suni War Cloud over the years. This one, real name Pedro Valdez Cordero, mostly wrestled in the late 60s and 70s. He had wrestled here previously as Pedro Valdez. This was Gene Lewis’ first territory as a full-time wrestler as he transitioned from being Dale Lewis’ driver to his “brother”. Miller had been wrestling for Joe Dusek in Nebraska.
Leaving the territory during the month were babyfaces George Strickland, Igor Putski, Jerry Goodvoice and Terry Lathan and heels Don Duffy and Gypsy Joe Rosario.
Strickland’s next full-time territory is East Texas in November. Igor Putski went to Japan for IWE (as Rick Ferrara). Goodvoice has a few matches in Amarillo later in the year and next shows up in Portland the following summer. Lathan goes to Gulf Coast. Duffy also goes to Gulf Coast briefly and then goes to work for Gulas. Rosario goes to Mid-Atlantic, where he wrestled as Pancho Valdez.
Other wrestlers not listed in the SPOT Ratings: Chuck Bowman, Mike Paidousis, Red McKim and women wrestlers Ann Casey, Dawn Lemke and Kay Noble.
CH-CH-CHANGES
Danny Hodge held on to the NWA World Junior Heavyweight title during the month, as did Bill Watts with the North American title. The US Tag Team belts went to Duke Myers & Terry Garvin on September 4th after a confusing two weeks. On August 21st, Ken Mantell & Tom Jones beat Bobby Hart & Lorenzo Parente to win the titles, but Hart & Parente ran off with the physical belts. A week later, Mantell & Jones beat Myers & Garvin in a title defense when the match was restarted after the third fall saw Jim Garvin interfere on behalf of his “brother” Terry & Duke. All this led to a three-team, round-robin one-night tournament on the 4th, with teams facing off in traditional tag bouts and when one team lost two matches, they were eliminated. Hart & Parente were eliminated first, followed by Jones & Mantell.
-----
Here are the FEUD Scores for the month. 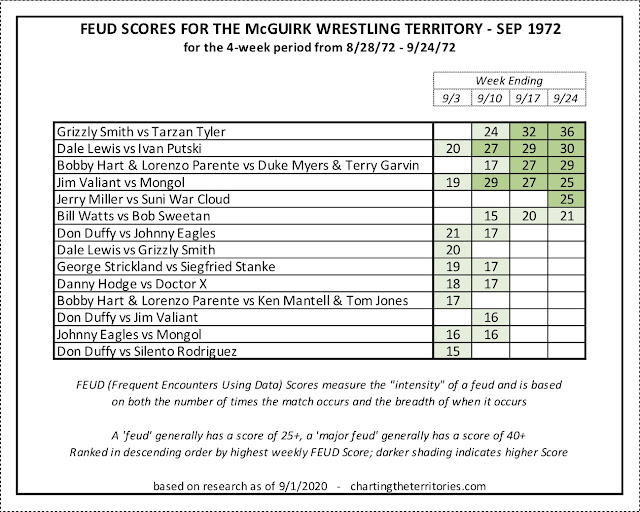