- July 15, 2020
Here's a look at Mid-South Wrestling in July 1980: the Mantell-Orndorff feud is not only still going strong but it’s about to double in size, a new Louisiana Heavyweight champ is crowned in a one-night tournament & more! 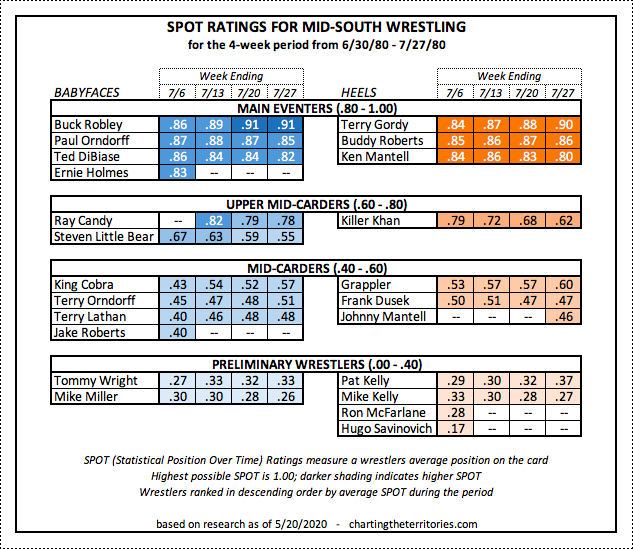 COMINGS AND GOINGS
Newcomers to the territory this month are babyface Ray Candy and heel Johnny Mantell. Candy had been wrestling for Nick Gulas. This was Candy’s first time in the area since January 1979. Mantell, younger brother of Ken, had been wrestling in Southern California in the first half of 1980, then toured for New Japan in June and July before coming here at the end of the month. With Paul Orndorff still feuding with Ken and with Paul’s younger brother Terry wrestling here, it seems natural for Johnny to come in for a tag team feud. Add in identical twins Mike & Pat Kelly and there was a lot of brotherly love going on in Mid-South.
Leaving the territory during the month were babyfaces Ernie Holmes and Jake Roberts and heels Hugo Savinovich, Ron McFarlane and Stan Stasiak. Former NFL player Holmes had a brief stint that was a bit of stunt casting. When he left, Candy basically took his place as the tag team partner of Buck Robley, working against the Freebirds to try and avenge JYD (who is still selling the injury from last month). Jake goes to Japan for a tour with IWE, Savinovich goes to Puerto Rico and McFarlane goes to work for McGuirk. Stasiak finished out the year working in Amarillo and East Texas. He then spends the last few years of his in-ring career in the Pacific Northwest, retiring in the fall of 1984.
Other wrestlers not listed in the SPOT Ratings: Tony Atlas, Tully Blanchard, Wahoo McDaniel and Leo Sykes (probably Leo Seitz, though he’s listed as “Sykes” in newspaper ads). Atlas was advertised for a few shows during the month, often teaming with Robley against the ‘Birds. Wahoo and Tully were both booked for the July 25th show in Shreveport that featured a one night tournament to crown a new Louisiana Heavyweight champion. The title was previously held by Junkyard Dog, as was the Mississippi title. Both were declared vacant after JYD’s injury (a tourney for the Mississippi title was held in August). Lou Thesz was advertised as special referee for the Shreveport tournament, and Junkyard Dog was also announced as presenting the title to the tourney winner (who ended up being Ken Mantell). Dog was advertised as “making a special appearance” on other shows as well towards the end of the month to build to his return in early August.
CH-CH-CHANGES
Role Changes: With Junkyard Dog injured, several wrestlers took his place as tag team partner of Buck Robley. That role was filled by Ernie Holmes, Ray Candy and Tony Atlas at various times during the month. Ted DiBiase also teamed with Robley on a few occasions; this was probably part of the long-term storyline of JYD and DiBiase being good friends, which added more depth to DiBiase’s heel turn in ’82.
Title Changes: As mentioned previously, Ken Mantell was crowned Louisiana Heavyweight champion after winning a one-night tournament. Ted DiBiase continued to hold on to the North American title, while Buddy Roberts & Terry Gordy reigned supreme as Mid-South Tag Team champs. It does not appear the “Freebird rule” had been created yet.
-----
Here are the FEUD Scores for the month. 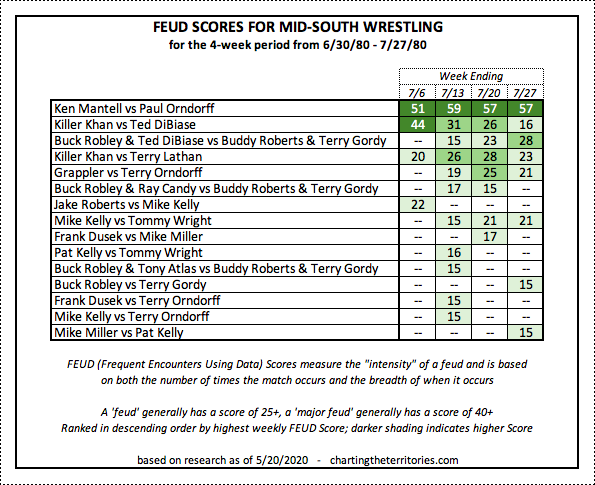