- July 14, 2020
Here's a look at the McGuirk wrestling territory in July 1976: the first-ever wrestling card at the Superdome featured Bill Watts finally getting a chance at NWA World Heavyweight champ Terry Funk, Dick Murdoch and Killer Karl Kox facing off in a Jim Bowie Death Match & more!
Here are the SPOT Ratings for the month. 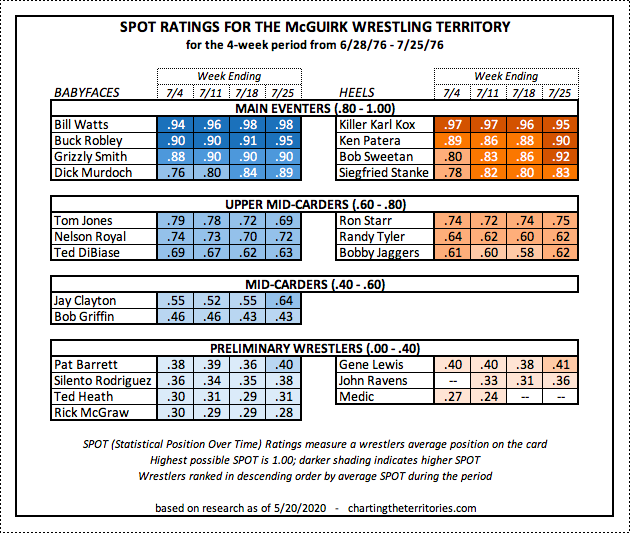 COMINGS AND GOINGS
Newcomers to the territory this month are babyface Pat Barrett and heel John Ravens.
“Irish” Pat Barrett (aka Paddy Barrett) came here for the first time since 1963, coming in from the WWWF. He would be a part of the ongoing tournament to fill the vacant NWA World Junior Heavyweight title. Ravens was sometimes billed as Sir John Ravens and his last name was sometimes spelled Raven. I don’t have any information on any other identities he may have used, and prior to this stint I have no information on his whereabouts.
Leaving the territory during the month was heel the Medic. He is believed to have been Jim Starr, who appears here as himself in September.
Other wrestlers not listed in the SPOT Ratings: Abdullah the Butcher, Andre the Giant, Dick the Bruiser, Harley Race, Terry Funk, Jean Louis, Mike Hendricks, Mike Shelton, Roberto Soto and midget wrestlers Billy the Kid, Bobo Johnson, Farmer Pete and Little Tokyo.
Abdullah, Andre, Dick the Bruiser and Funk all came in for the big event at the Superdome in New Orleans on July 17th. This was the first-ever wrestling card held at the Dome, which opened in 1975. The main event was Funk defending the NWA World title against Bill Watts. Recall that a big angle in the territory for much of the year to date was Funk having bounties out on Watts and Dick Murdoch in the hopes that they would be injured, thus he could avoid defending the title against them. In the case of Watts, this stemmed from a TV match where Watts pinned Funk. That match aired just prior to Funk winning the World title the previous December. Results from the Superdome indicate the match ended in a double countout. I am unaware of a rematch between the two, so perhaps it was billed as Watts’ “last” or “only” title shot.
Other notable matches at the Dome were Murdoch beating Killer Karl Kox in a “Jim Bowie Death Match”, Andre the Giant teaming with Buck Robley to defeat Bob Sweetan & Ken Patera and Abdullah the Butcher going to a double disqualification with Dick the Bruiser. The event drew a reported 17,000 fans paying $75,000, which was considered a big success. They normally ran a ~3,500 seat venue in the New Orleans market, occasionally moving to the larger Municipal Auditorium with a max capacity of a little under 8,000.
The Jim Bowie Death Match saw both men wear hoods that completely covered their heads, including their eyes and mouth. It was the same basic idea as the Prince of Darkness matches that Kevin Sullivan would do in Florida or the Jake Roberts vs Rick Martel match at Wrestlemania 7. The storyline was that Kox had injured Murdoch by throwing ink in his eyes and blinding him. Murdoch returned early, “against doctor’s orders”. They shot an angle where Kox grabbed a ringside camera, pointed it at Murdoch and repeatedly took pictures with it so the flash would further irritate Murdoch’s sensitive eyes. The stipulations for the match were to level the playing field with both men wrestling “blind”. In Watts’ autobiography, he mentions he originally saw this stipulation in 1968 in the AWA when Mad Dog Vachon faced the Crusher.
Harley worked against Bill Watts in Tulsa and Shreveport in bounty matches that were also for Watts’ North American title. These matches took place earlier in the week of the Superdome show, and the bounty was listed as $7,500 (which would be equivalent to over $34,000 today). Watts won both bouts.
CH-CH-CHANGES
Role Changes: Youngsters Jay Clayton & Ted DiBiase formed a tag team, facing the heel team of Bobby Jaggers & Randy Tyler on a few occasions. A year earlier, Clayton and DiBiase had a mid-card feud over who would be “Rookie of the Year”.
Title Changes: No title changes this month. Bob Sweetan & Killer Karl Kox are the US Tag Team champions and Bill Watts is the North American champ.
-----
Here are the FEUD Scores for the month. 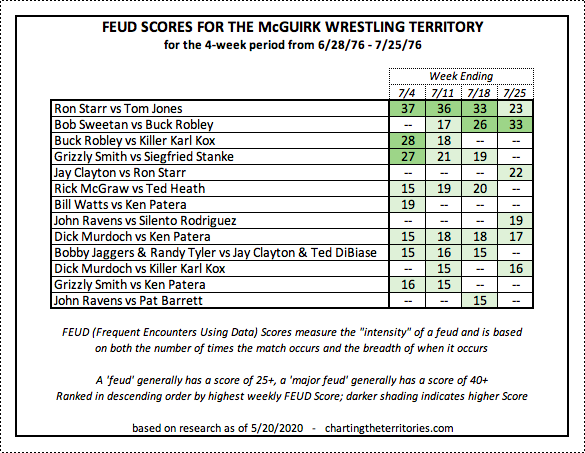