- July 08, 2020
Here is a look at the first 3 months of Hacksaw Duggan's run in Mid-South Wrestling, where he gradually moved up the cards from the prelims to main events.
James Stuart Duggan turned pro in the spring of 1979, working in East Texas. He spent the first couple years of his career wrestling various territories, including the WWWF, Georgia and Southeastern and also did one tour for New Japan in the summer of 1981. In January 1982 he started for Southwest Championship Wrestling, which may have been the first place he used the nickname "Hacksaw". While in Southwest, he worked two dates for Mid-South Wrestling, including a TV taping where he unsuccessfully tried to collect a bounty on Dick Murdoch.
A few months after that, he started full time with Mid-South, debuting on 7/5 in New Orleans against Jesse Barr and then appearing on the TV taping two days later in Shreveport. His earliest TV appearances saw him being scouted by Scandor Akbar, but he eventually linked up with the recently-turned-heel Ted DiBiase.
On the house shows, Duggan worked in prelims to start, getting victories over many of the preliminary babyfaces. On the TV that first aired on 7/31, he teams with Ted DiBiase for the first time. By early August, he's mainly in the mid-cards, working against a variety of opponents. He first teams with DiBiase on the road on 8/13 in Shreveport, and his first house show main event is six days later in Loranger, LA, teaming with DiBiase against JYD & Mr Olympia. From then through late September, he's booked against mostly upper mid-carders on the road.
By late September, he is wrestling much higher up on the cards. One Man Gang and Killer Khan, who had been occupying 2 of the top spots on the heel side, were about to leave and were being phased out. DiBiase has been firmly established as the top heel & Duggan gets the rub. By the 2nd week in October, Hacksaw is regularly (but not always) main eventing house shows. His most frequent opponents are now JYD & Olympia, completing a 3-month climb up the cards.
The following chart shows Duggan's rise up the cards on a week-to-week basis, using our SPOT Rating. SPOT, which stands for Statistical Position Over Time, expresses a wrestlers position (or spot) on the cards as a number between .00 and 1.00
It also looks at the most frequently occurring matches using our FEUD Score. FEUD stands for Frequent encounters Using Data and takes into consideration both the number of times a specific match occurs and the breadth of when it occurs.
This is a visual representation of Duggan's climb up the cards. We see his SPOT Rating is low early on, and his primary opponent in prelim babyface Jesse Barr. As he moves up to the mid-cards, his primary opponent is upper mid-carder Mr. Olympia (Jerry Stubbs). And as he starts teaming up regularly with DiBiase to face Junkyard Dog & Olympia on the house shows, his SPOT Rating equates to him being a Main Eventer. 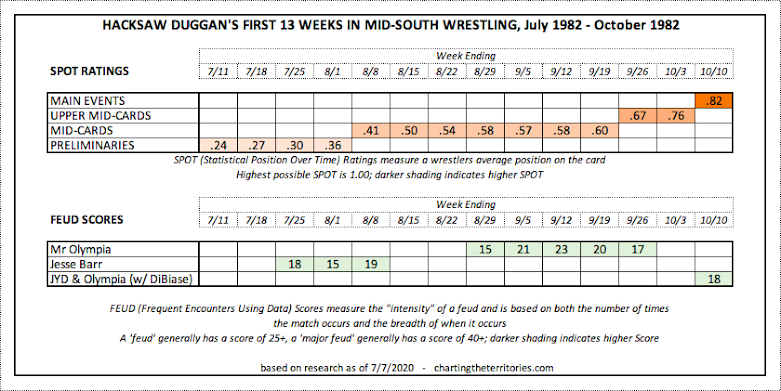 The following is a list of all of Duggan's known matches in Mid-South between 7/5/82 and 10/10/82. The majority of this information comes from my own personal research. The listings from New Orleans, Oklahoma City and Little Rock come from various sources including https://www.wrestlingdata.com and Mark James' Wrestling Record Book: Mid-South/UWF 1979-1987.