- February 05, 2020
For the week ending February 10th, 1980: the semi-finals of the Junior Heavyweight title tournament, the future Glamour Girls come to the area & more! 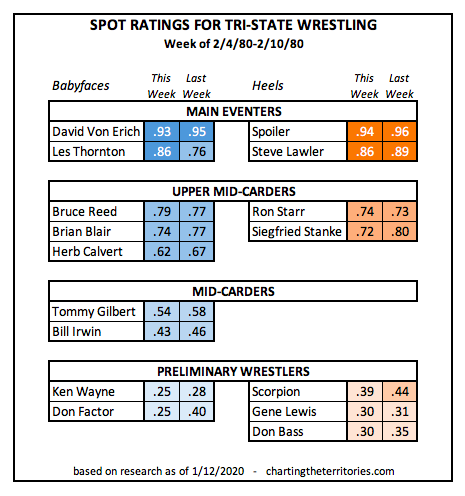 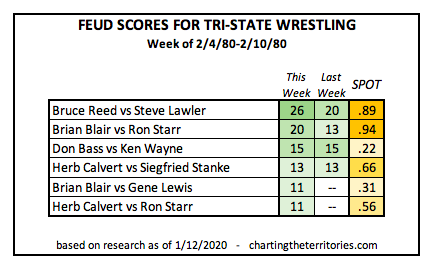 Women wrestlers Judy Martin, Kandi Malloy, Leilani Kai and Vivian St John started a two-week run in the territory this week. They usually worked tag team bouts, with Martin & Kai teaming up against Malloy & St John. For reference purposes, their SPOT Ratings would put them in the Upper Mid-Cards, just above Herb Calvert.

There were no newcomers this week, and nobody left the territory either. Technically, David Von Erich doesn't seem to have had any bouts in the territory this week but has enough matches in the weeks before and after to be included in the SPOT Ratings chart.

Bruce Reed continues to feud with Steve Lawler, with their FEUD Score increasing to a 26 this week. Brian Blair and Ron Starr also face off regularly, including main events in Fort Smith and Stillwell.

After several months of sporadic "elimination matches" as part of a tournament to crown a new Junior Heavyweight champion for the promotion, the semi-finals took place this week in Tulsa, with Ron Starr beating Tommy Gilbert and Les Thornton defeating Brian Blair. Starr and Thornton will meet next week in Tulsa in the finals of the tournament. Siegfried Stanke & Steve Lawler (managed by Scandor Akbar) are still the US Tag Team champs.