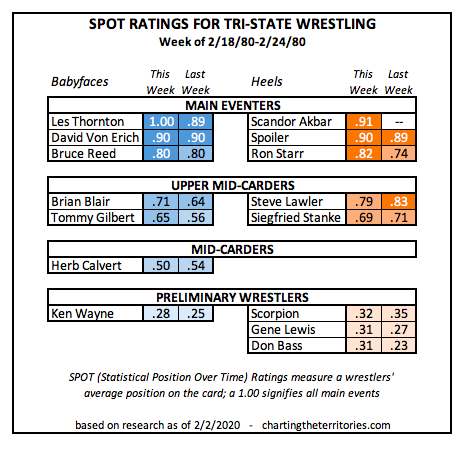 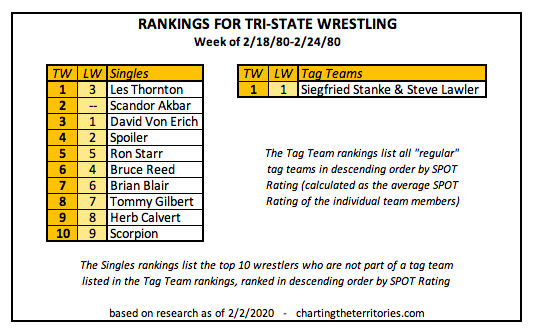 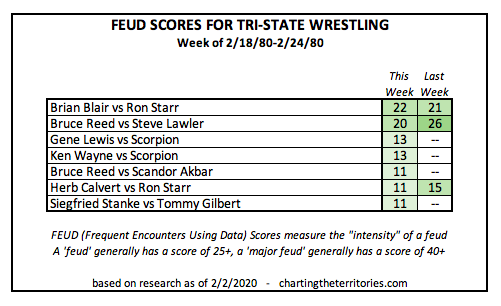 Other wrestlers advertised for shows this week but not listed in the SPOT ratings: Don Factor.

Scandor Akbar, who is mostly serving as a manager for some of the top heels, begins a run of in-ring activity. While I typically don't include managers as part of the "wrestler roster" unless they are wrestling full-time (such as Buck Robley for much of his career), he is booked in matches most every show for the next several weeks. For this reason, and also because the roster is so thin to begin with, I decided to add him to the roster. He debuts in the Rankings at #2, with a SPOT Rating of .91 this week.

New NWA World Junior Heavyweight champion Ron Starr was booked to defend the title against Brian Blair this week in Fort Smith and Springfield. Blair and Starr were kept apart during the title tournament, with Blair losing in the semi-finals to Les Thornton. With Thornton bouncing back-and-forth between here and East Texas, Blair is a natural title challenger for Starr around the loop. The Blair-Starr feud has a FEUD Score of 22 this week, putting it just above Bruce Reed vs Steve Lawler for the highest scoring feud. Reed faced Lawler in Tulsa and Fort Smith this week, and took on Akbar in Springfield. He won in Tulsa and I don't have results for the other shows. The ad for Fort Smith states that if Reed defeats Lawler, he "gets General Akbar next week". Which he does, so we can assume Reed won there as well.