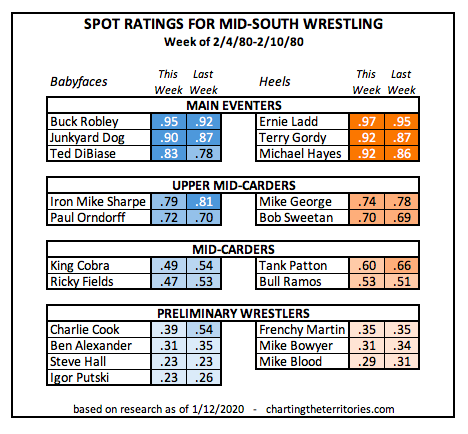 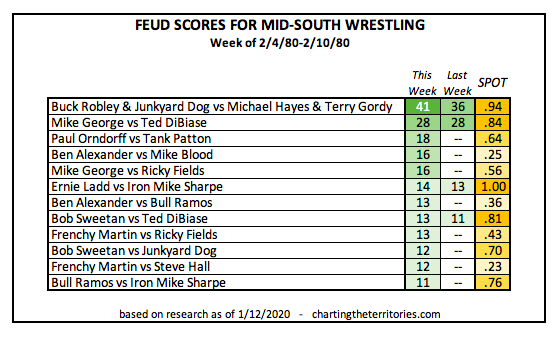 The feud between Buck Robley & Junkyard Dog and The Freebirds continues to heat up, with a FEUD Score of 41 this week (generally speaking, a score above 40 signifies a "major feud"). The two teams squared off this week in Baton Rouge, Loranger and Houma, with the bout in Baton Rouge being a Texas Tornado match.

Chris Curtis left the territory. Chris, real name Chris Multerer, spent the next several years as an enhancement wrestler for the AWA and WWF. In 2014, he self-published a book entitled Job Man: My 25 Years in Professional Wrestling. An expanded edition was released last October and can be found at on Amazon at this link.

Charlie Cook's SPOT Rating nosedives, falling to a .39 this week. He is not being booked regularly and is clearly being de-pushed on his way out of the territory. Cook was instrumental in the initial push of Junkyard Dog last fall when JYD came in as a heel, as the two feuded for several weeks both in singles bouts and tag team matches (with Ayala teaming with Cook and Pork Chop Cash teaming with Dog).

With DiBiase beating Mike George last week to win the North American title, it looks like George has placed a bounty on DiBiase. Bob Sweetan tried to collect it in Baton Rouge, and perhaps some of DiBiase's other bouts this week were "for the bounty" as well.