- February 19, 2020
For the week ending February 24th, 1980: a rather surprising name leaves the territory for a month-long tour of Japan, a third man interjects himself into the Freebirds' feud with JYD & Robley (and no, it's not Buddy Roberts...yet) & more! 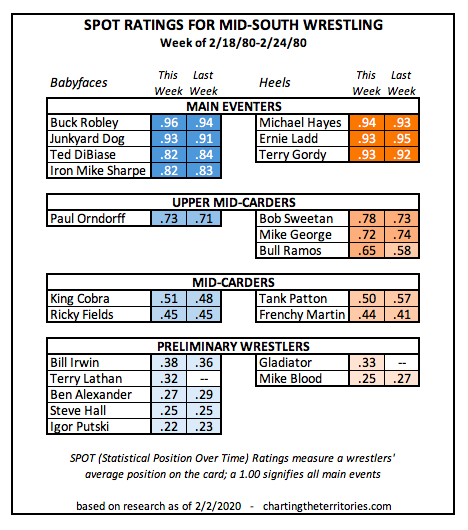 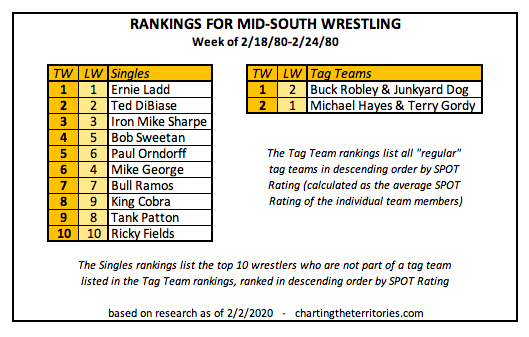 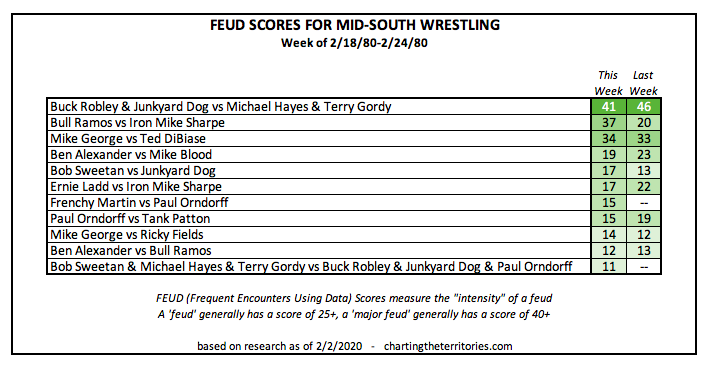 Other wrestlers advertised for shows this week but not listed in the SPOT ratings: Tommy Rich and Tony Atlas. Rich & Atlas were both booked in the territory on Saturday night, Rich in Alexandria and Atlas in Kosciusko, MS. Atlas worked Houston the night before. In the case of Rich, results on wrestlingdata.com show Paul Orndorff working twice in Alexandria and subbing for him. That site also lists results from a show in Columbus, GA the same day where Rich defeated Austin Idol.

Two newcomers to the roster this week are The Gladiator and Terry Lathan. I don't know who this version of the Gladiator was other than it couldn't have been Ricky Hunter. Lathan's name was sometimes spelled as Terry Latham. He had been working in the Pensacola area for a promotion running opposition to Ron Fuller's Southeastern territory. It appears this promotion was run by Billy Golden, which (I think) means Billy was running opposition to his own cousin.

Mike Bowyer (Boyette) left the territory to go on a tour of Japan for the IWE. He would return here after the month-long tour. Other North American wrestlers on the tour were Mongolian Stomper, Jake Roberts, Eddie Sullivan and Tom Stanton; Dick the Bruiser came in for the final week of the tour. This was Boyette's first Japanese tour; he apparently did well enough to be brought back for another tour a year later.

Bob Sweetan jumps ahead of Mike George this week in the SPOT Ratings and the Rankings. George is still feuding with Ted DiBiase over the North American title. Sweetan becomes an extended part of the feud between Junkyard Dog & Buck Robley and The Freebirds. Sweetan faced Dog in a singles bout in Baton Rouge this week, and the two were on opposite sides of a six-man tag in Shreveport. The JYD & Robley vs 'Birds feud seems to have peaked, at least as it regards the specific pairing of JYD & Robley. We know JYD and The Freebirds are not done with each other by a long shot. The FEUD Score for JYD & Robley vs Hayes & Gordy fell from a 46 to a 41 this week. The feud between Bull Ramos and Iron Mike Sharpe heats up significantly, as their FEUD Score increased from a 20 to a 37. Ramos and Sharpe squared off in Jackson, Greenville and Shreveport this week, with Greenville being a lumberjack match and Shreveport being a no-disqualification match (which was won by Ramos).