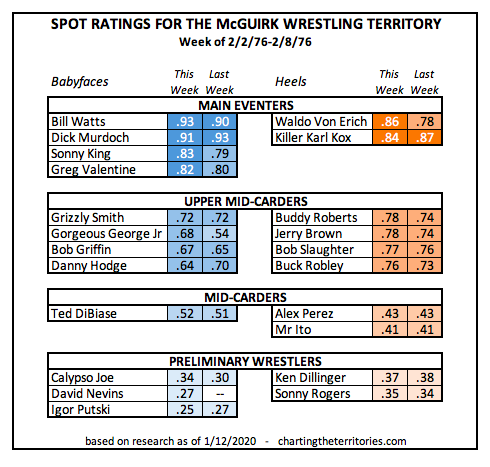 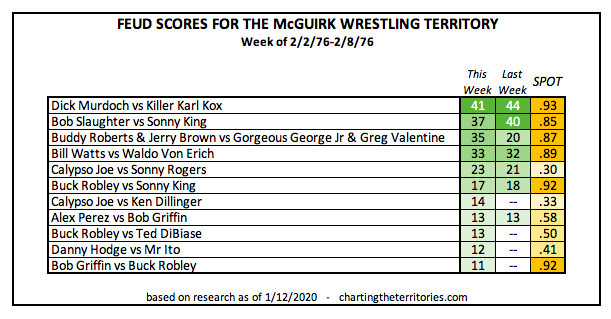 Other wrestlers advertised for shows this week but not listed in the SPOT ratings: Jack Curtis Jr, Joe Turner and Oni Wiki Wiki.

The lone newcomer this week was preliminary wrestler David Nevins (sometime spelled in ads as Nivens). Based on my research, this seems to have been his first territory; he wrestled for several years, mostly in Central States and seemingly as a part-timer most of the way. Leaving the territory was Mike Pappas. He went to Central States from here, and would return about a year later.

Waldo Von Erich leapfrogs over Killer Karl Kox this week to lead the heel side in SPOT Rating. Kox' feud with Dick Murdoch seems to be receding, while Waldo's feud with Bill Watts occupied main event slots in Tulsa, Shreveport, Chalmette and Lafayette. On the babyface side, Watts likewise leapfrogs Murdoch to occupy the top spot.

The biggest mover on the SPOT Ratings is Gorgeous George Jr., who moves up from a .54 to a .68, putting him in the Upper Mid-Card category. He & Greg Valentine are feuding with Buddy Roberts & Jerry Brown over the US Tag Team titles, with their FEUD Score increasing to a 35 this week. George & Valentine are acknowledged as US Tag Team champs in Shreveport this week according to a newspaper article, and likely other towns as well.

Tuesday - Alexandria, LA
-Lumberjack match: Bob Griffin vs Buck Robley
-Bob Slaughter vs Sonny King
-Alex Perez vs Danny Hodge
-Grizzly Smith vs Mr Ito
-Igor Putski vs Ken Dillinger
*NOTE: While the newspaper ad lists Griffin vs Robley as a lumberjack match, the results in the following days' paper lists Slaughter vs King as being the lumberjack match; looking at the previous week's results, the match results from this week, and the following week's lineup doesn't clear up which of the two bouts it was, so I'm sticking with the listing in the ad