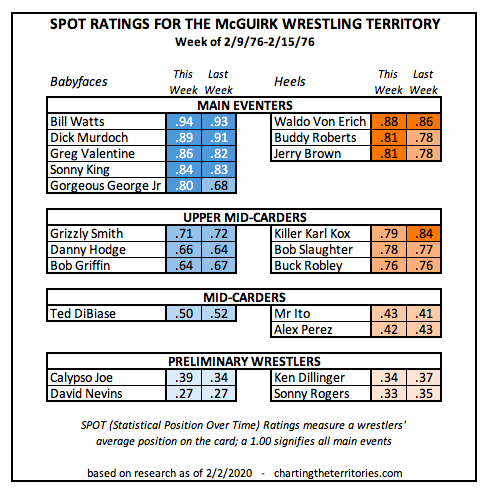 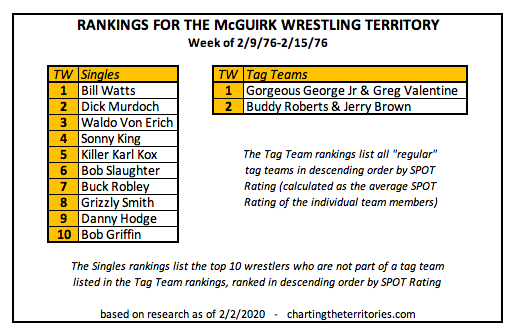 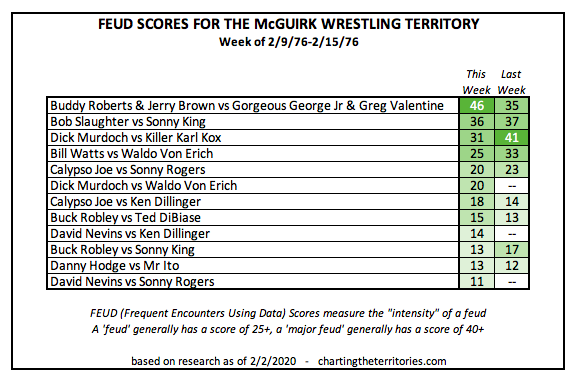 Other wrestlers advertised for shows this week but not listed in the SPOT ratings: Jack Curtis Jr and women wrestlers Toni Rose and Vicki Williams.

There were no newcomers this week. Igor Putski left the territory, going to Northern California (where he worked as Rick Ferrara). He would return here over the summer.

Gorgeous George Jr continues his rapid climb up the SPOT Ratings this week. His SPOT Rating increases from a .68 to a .80, putting him in the Main Eventer category. George & Greg Valentine hold the US Tag Team titles and are feuding with The Hollywood Blondes (Buddy Roberts & Jerry Brown, managed by Sir Oliver Humperdink). That feud has the highest FEUD Score this week of 46, crossing the theoretical "major feud" threshold. Other feuds of note are Bob Slaughter vs Sonny King, Dick Murdoch vs Killer Karl Kox and Bill Watts vs Waldo Von Erich. In the case of Murdoch and Kox, their feud is winding down. Kox finds himself being moved slightly down the cards into the Upper Mid-Carder category. This is mostly due to the rotation of top talent in and out of the actual main events, though Kox will stay in the Upper Mid-Card category for the foreseeable future, particularly as he begins a series of matches with young Ted DiBiase in a couple of weeks.