- January 06, 2020
For the week ending January 13th, 1980: JYD and the Freebirds continue to feud, Ted DiBiase moves up the cards feuding with Ox Baker, Biloxi experiences a "Wildfire" & more! 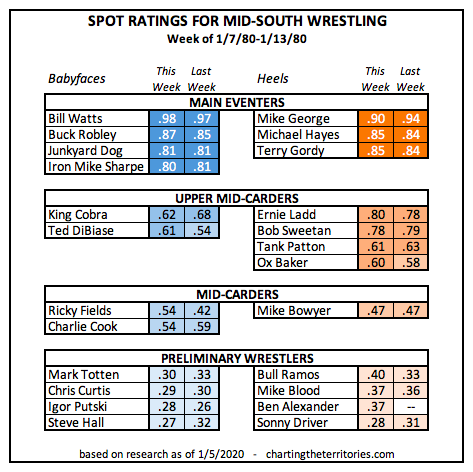 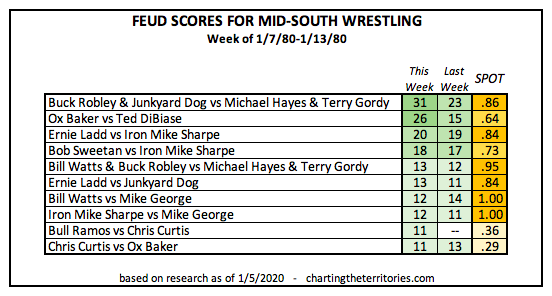 Other wrestlers advertised for shows this week but not listed in the SPOT ratings: Tommy Rich, El Diablo and Tom Price. Rich was in Georgia at the time, and actually worked the TV tapings at TBS Studios on Saturday morning and then worked Biloxi. The Biloxi shows sometimes had wrestlers from Georgia and Southeastern along with the Mid-South crew.

The one newcomer this week was Ben Alexander, who came in from Southern California.

Gino Hernandez, who had been working here and in Houston for Paul Boesch, left the territory. He continues to work the Houston shows and in February starts in the rest of the East Texas territory.

Friday - Shreveport, LA
-Iron Mike Sharpe vs Ox Baker
-Ernie Ladd vs Junkyard Dog
*these come from the results printed the day after the show in the newspaper; it appears that the ad in the paper prior to the show actually listed the following week's card.