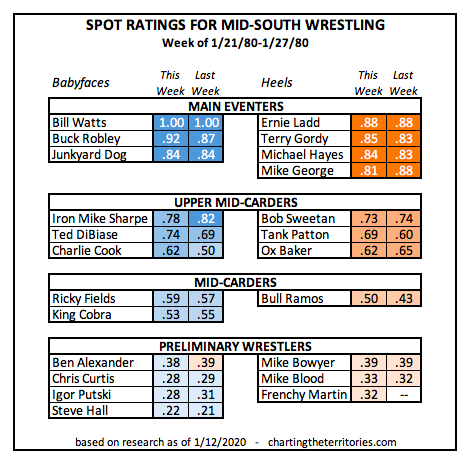 Other wrestlers advertised for shows this week but not listed in the SPOT ratings: Gino Hernandez, Jose Lothario and midget wrestlers Cowboy Lang and Little Tokyo. Gino and Jose worked Lake Charles this week, Gino against JYD and Jose against Bull Ramos.

The only newcomer this week was Frenchy Martin. Frenchy had been wrestling for Stampede as Don Gagne, though it appears he made a few appearances in Amarillo in between Stampede and here. I have also moved Ben Alexander from the heel side of the roster to the babyface side. In his first two weeks here, his opponents were mostly babyfaces, but now he's mostly going up against heels.

Leaving the territory were Mark Totten and Sonny Driver. This seems to have been the end of Totten's brief wrestling career. The former University of Florida football player and 10th-round NFL draft pick (by Green Bay) began a career in financial services in 1980 that continues to this day. Driver may have worked a show or two for Georgia later in the year, but that seems to be the end of it for him in wrestling as well.

Catching up with title histories, it appears there were two title changes last week. Mike George regained the North American title from Bill Watts in Alexandria, two days after he lost the Mississippi state title to Iron Mike Sharpe. Ernie Ladd is the current Louisiana state champ, while Hayes & Gordy are the Mid-South Tag Team titleholders.