- January 06, 2020
For the week ending January 11th, 1976: Haystack Calhoun sets up shop in the territory for a few weeks, the vacated US Tag Team titles become un-vacated & more! 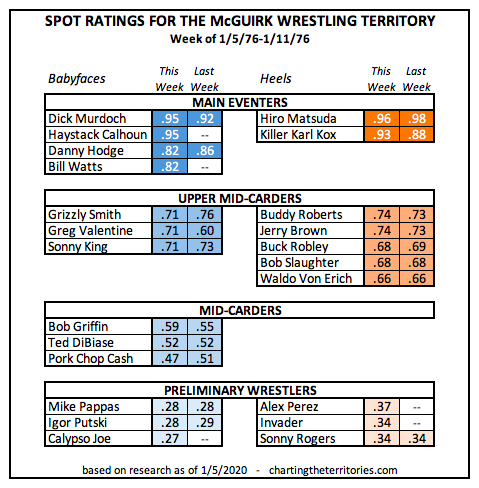 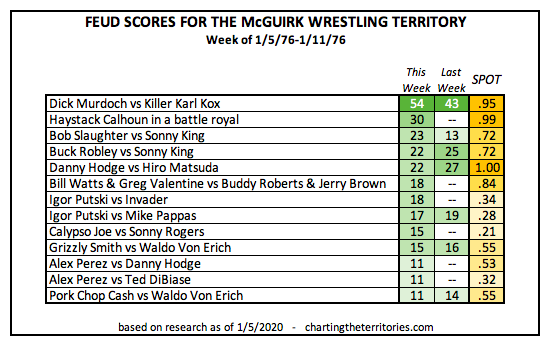 Other wrestlers advertised for shows this week but not listed in the SPOT ratings: Bob Sweetan and Jack Curtis Jr. In the case of Curtis, he shifts to a part-time schedule in the territory around this time. I am not too well-versed in the Culkin family tree, but I believe that Curtis Jr. is the nephew of George Culkin, which I think makes him Gil Culkin's cousin. But I could be wrong. Sweetan is booked against Buck Robley in Jackson this week, though he's primarily working for Gulf Coast at this time.

After a few weeks off (though he worked at least once in Georgia), Bill Watts returns to the house shows this week. Other newcomers are Haystack Calhoun, Alex Perez, Calypso Joe and The Invader. Perez came in from Amarillo. I am unsure of Calypso Joe's identity or other names he may have used. After a few months here, he shows up in some ads for Gulf Coast but is gone pretty quickly and then seems to disappear. One of the Gulf Coast ads identifies him as African-American, but that's literally the only piece of info I have on him. Same goes for The Invader; one newspaper article lists him as a "300 pounder", but that's all the info I have. It's not Jose Gonzalez, who was in Portland working as Manny Cruz at this time. It also can't be Roberto Soto (who worked as an Invader in Puerto Rico) as he's in Mid-Atlantic in January along with his brother Manuel.

Regarding Haystack Calhoun, I have him listed in the SPOT Ratings because he comes in for a solid three weeks. The general rule of thumb is someone has to work at least a couple of shows per week for at least a couple of weeks to be considered a "full-timer". While Haystack is obviously more of a special attraction, I did include him because of the length of his stay. Haystack was advertised in battle royals in Fort Smith, Greenville, Monroe and Loranger this week. He also worked as a special referee in Tulsa and Shreveport. My inclusion of "Haystack Calhoun in a battle royal" in the FEUD Scores is based on the fact that when he's advertised for battle royals, it is very clear from the ads that he is positioned as a draw and his being in the battle royal IS the draw. The battle royals generally included all the wrestlers booked on the card, but Haystack is not in another match, he's only featured in the royal. Keep in mind that while I call it a "FEUD Score", it is merely a measure of the matches that occur most frequently; they are not necessarily all "feuds".

Besides Jack Curtis Jr., also removed from the SPOT Ratings this week were Jay Clayton and Denny Alberts. Clayton goes to Georgia and Alberts goes to Big Time (Detroit).