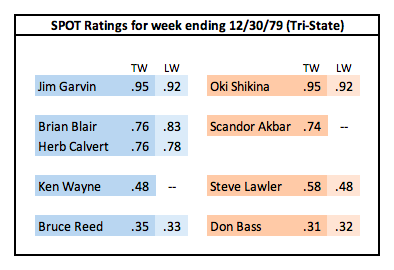 
Scandor Akbar returns to the SPOT Ratings chart this week, though he's still basically wrestling part-time and managing full-time. Ken Wayne debuted for the territory this week, coming in from Memphis. Ron Starr went to Portland to wrestle over the holidays so I removed him from the SPOT Ratings temporarily. Ron McFarlane leaves the territory and goes to Central States.

Other wrestlers advertised for shows this week but not listed in the ratings: Bill Ash, Johnny Mantell, Kenny Milsap and midget wrestlers Billy the Kid and Coconut Willie.