- December 15, 2019
For the week ending December 23rd, 1979: Blair and Starr face off in a couple of stipulation matches, Akbar reduces his in-ring schedule to focus on managing & more! 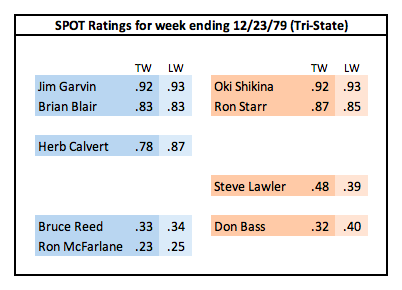 
Other wrestlers advertised for shows this week but not listed in the ratings: Siegfried Stanke, Ted Heath and Tom Prichard.

Removed from the SPOT ratings this week were Don Factor and Scandor Akbar. Factor's name doesn't show up anywhere else (and I'm not sure if he used another name), but he does come back here part-time in late January. Akbar had been wrestling on a regular basis while also managing a couple of the heels, but it appears that at this point he moves primarily to a managerial role.