- December 02, 2019
For the week ending December 9th, 1979: Ernie Ladd starts a run as a regular, Sweetan feuding with Watts and Mr Wrestling II (who is also feuding with Mike George) & more! 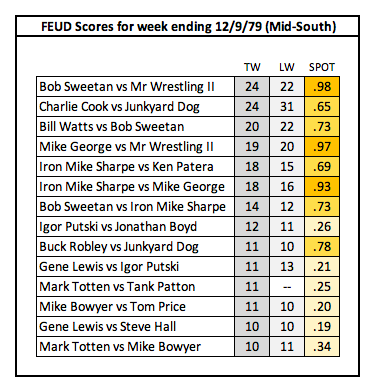 Newcomers to the SPOT chart this week were Ernie Ladd, Jerry Oates and Ken Patera. Ladd begins a run as a regular; he still works shots for various territories including Florida and Georgia but his "home base" seems to be here for now. Oates and Patera are booked here for the next couple of weeks. Patera was also working WWWF TV tapings to build up to a run there starting in January 1980.

Removed from the SPOT chart were Dick Murdoch (no bookings in the territory this week) and King Kong Mosca. Mosca left the territory and may have worked a couple of shows for the AWA in December before going to All Japan in January 1980.

In addition there are results for a show in Houma, LA on Sunday that can be found at https://www.wrestlingdata.com, https://www.cagematch.net and in Mark James' book Mid-South/UWF 1979-1987
1979 Mid-South