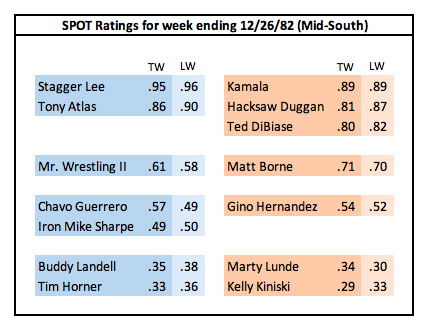 Mr. Olympia (Jerry Stubbs) left the territory this week as the result of a match taped on December 8th at the Shreveport TV tapings. Stagger Lee & Mr. Wrestling II were scheduled to face Matt Borne & Ted DiBiase in a no-disqualification match for the Mid-South Tag Team titles with the loser of the fall having to leave town for 90 days. Wrestling II was injured prior to the match, so Olympia took his place and ended up losing the fall. He went to Southeastern and would return here after the 90 days were up.

The promotion took a week off for the holidays, with the only known show this week taking place on Sunday in Houston. As was the norm at the time, the Houston cards featured talent from Southwest and from outside the area in addition to some of the Mid-South wrestlers.

This will be the last week we cover this period of time (at least for now). Starting with the New Year, we will be covering 1972, 1976 and 1980 each and every week. In addition, on the last Friday of each month I will post three months' worth of house show lineups, SPOT Ratings and FEUD Scores. These will start with the fourth quarter of 1959 (when Danny Hodge made his pro debut), which will be posted on Friday, December 27th. And on a regular basis I will do special projects, like the Deep Dive on Dusty Rhodes and the Comparison of SPOT Ratings to Apter magazine ratings for December 1984 that I recently did.