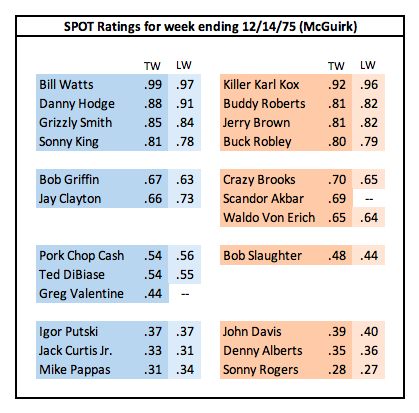 Other wrestlers advertised for shows this week but not listed in the SPOT ratings: Bob Sweetan, Jack Brisco and Nick Kozak. Brisco came in for two dates sandwiched in between shots in Georgia and Florida. In addition, Gulf Coast wrestlers Bob Kelly, Gene Lewis, Gorgeous George Jr, Hippie Boyette, Jack Dalton (Don Fargo), Ted Heath and Wrestling Pro #1 were all booked on the Baton Rouge show this week. Wednesday seems to be the only weeknight they had three shows scheduled, and without the troupe of midget wrestlers that had been in the territory the previous couple of weeks the roster was too thin to put on three full cards without a little outside help.

Newcomers to the SPOT chart this week were Greg Valentine and Scandor Akbar. Valentine returned from his New Japan tour on Sunday (with a shot in Los Angeles a couple of days earlier), which was presumably his return from a storyline "injury". Akbar worked here for a few weeks over the holiday season. I'm not sure of his whereabouts for several months prior, though it's possible he was working solely as a manager during that time.