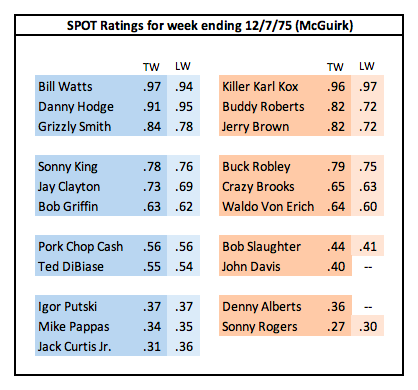 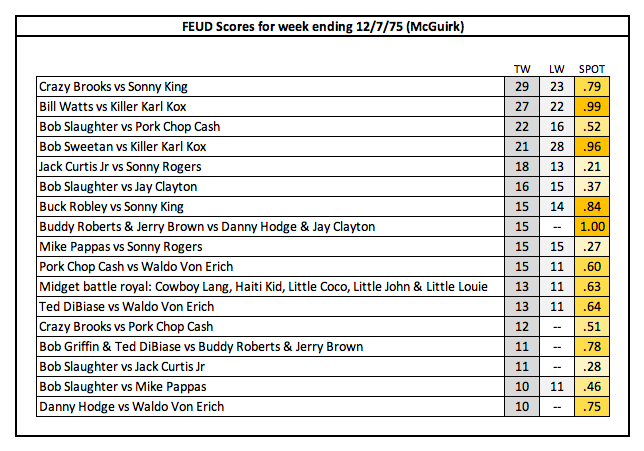 Other wrestlers advertised for shows this week but not listed in the SPOT ratings:
Greg Valentine, Oni Wiki Wiki, Stan Hansen, plus midget wrestlers Cowboy Lang, Haiti Kid, Little Coco, Little John and Little Louie. In the case of Valentine, he was advertised for a show in Jackson MS but was in New Japan at the time, so it likely was intentional false advertising as part of an angle. This didn't happen too often (and generally the angle was run on TV so most of the fans were at least aware that the wrestler in question might not appear despite what's printed in the newspaper ad), but it did happen on occasion.

Newcomers to the SPOT chart this week were Denny Alberts and John Davis. Alberts had been working sporadically for Big Time Wrestling (Detroit) earlier in the year, but this may have been his first regular stint in a territory. I'm not sure of John Davis' background or if he wrestled under other names; due to his having such a common first and last name, a search of online newspaper archives is virtually impossible.

Removed from the SPOT chart were The Alaskan, The Angel, Bob Sweetan and Hiro Matsuda. The Alaskan (Mike York) went to work for Gulas. The next known whereabouts for the Angel (Frank Morrell) are in February '76 when he starts for Gulas working as The Spoiler. Sweetan went to Gulf Coast, though he was booked for a couple of shows in Jackson MS in December (and thus I've still listed him vs Kox in the FEUD chart). Matsuda went to All Japan and would return at the end of the year.

Saturday - Greenwood, MS
-Buddy Roberts & Jerry Brown vs Danny Hodge & Jay Clayton
-Bob Slaughter vs Mike Pappas
-Igor Putski vs Mike Pappas
(Pappas being listed twice is presumably a typo in the newspaper ad; since he was slotted as a babyface, him vs Slaughter is more likely than him vs Putski)