- December 22, 2019
I thought it would be interesting to take a look at the SPOT Rating that we calculate at Charting the Territories and compare them to the "Official Ratings" published in the so-called Apter mags.


I used the April 1985 issue of The Wrestler, where the ratings were for the period ended December 21st, 1984. We'll take a look at seven different territories (omitting the AWA and the WWF) and compare the ratings below.

First, some notes on methodology. The ratings in the magazine attempted to rank the top singles wrestlers; so wrestlers who primarily competed in tag teams usually are not listed. I say usually because there are some exceptions. In an attempt to be consistent, I did not list tag team wrestlers UNLESS they were listed in the magazine ratings.

I calculated SPOT Ratings based on available house show data for the three-week period from December 1st to 21st. While much of this data is the result of my own research, I did use data from wrestlingdata.com for territories I have not fully researched. I only listed wrestlers who were regulars in the territory as of the third week in December; this leads to a few differences between my ratings and the magazine ratings, which are noted below.

The magazine ratings always list the holder of the top singles title number 1 in their ratings. I chose not to do this, which led to some interesting differences.

Let's take a look at these results closer for each territory: 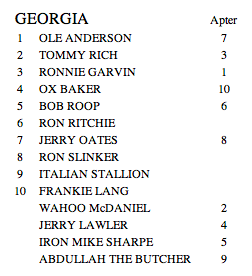 This was the Championship Wrestling from Georgia promotion, as GCW folded in July of 1984. Ole Anderson was primarily teaming up with Thunderbolt Patterson at this time, but since he is listed in the magazine ratings (and Thunderbolt was not), my SPOT Ratings have him at number 1. Ronnie Garvin was the National Heavyweight champion but Ole & Thunderbolt typically were in main events, so Ole ranks above Garvin. Tommy Rich is also ranked above the singles champ in my ratings, he was feuding with Bob Roop at the time but also had some main event tag team and six-man matches. The roster in this territory was very thin at the time and they were working closely with Mid-Southern (aka Memphis). Jerry Lawler and Iron Mike Sharpe were listed in the magazine ratings, but since they were both based out of Memphis I did not include them in my ratings. Wahoo McDaniel was in Mid-Atlantic at the time, but had received a shot at Garvin's National title at the Omni in November. Abdullah wasn't full-time here, so I did not include him in my ratings. Taking out those four wrestlers, you can see how thin the roster is, as we end up with prelim wrestlers Ron Slinker, Italian Stallion and Frankie Lang (aka Lancaster) in the top 10. 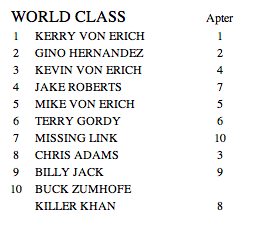 The ratings for World Class Championship Wrestling match up pretty well with the SPOT Ratings. The two main differences are Chris Adams being rated much lower in the SPOT Ratings, and Killer Khan not being listed at all. My records show Khan left the territory after December 7th, so I did not include him.  Adams wrestled in some main events but also in a few singles preliminary bouts, which affected his SPOT Rating. 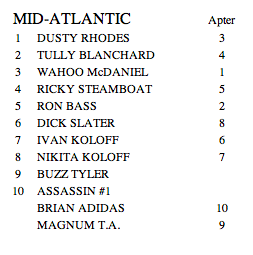 Ric Fair was the NWA World Heavyweight champ at this time and was based in Mid-Atlantic. The magazine typically did not put the World champ in the ratings for his "home base", so I didn't either. But he would have been number one if I had. The magazine listed Brian Adidas and Magnum TA in their ratings; my SPOT Ratings have Adidas lower than both Buzz Tyler and Assassin #1 so they made the cut whereas he did not. As for Magnum, he debuted around this time in the territory after leaving Mid-South in early December. He may have worked some TV tapings before the 21st, but I don't have him on any house shows until the 25th. 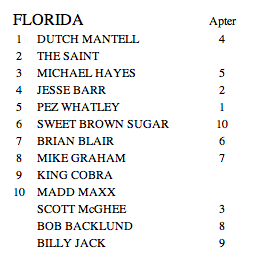 The first glaring omission in the ratings so far is The Saint (David Sierra) not being listed in the magazine's Florida ratings. He was feuding with Dutch Mantell in main events throughout the territory at this time. While Dutch likely won every bout between them, the SPOT Ratings don't take wins and losses into consideration. Scott McGhee had returned from a tour of Japan on December 9th, but his SPOT Rating is lower than that of other wrestlers and he didn't make my top 10. Backlund hadn't worked in Florida since November 21st, and Billy Jack only did a couple of shows here in December; his home base was still World Class. The King Cobra listed here was George Weingeroff. 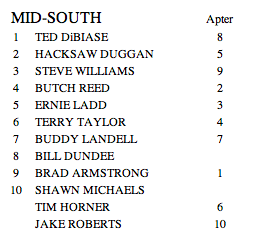 Brad Armstrong was the North American champion, having won the title at a TV taping in Shreveport on December 5th. However, he was mostly wrestling in preliminary bouts on the house shows in December. Remember that the title change likely hadn't aired in many markets, so they were building him up on the undercard while waiting for the TV tape to cycle though the territory. Tim Horner's magazine rating seems out of whack, my SPOT Ratings have him at number 12 overall. And my records don't show Jake coming in until January of 1985. Dundee was about to be either phased out as a full-timer (I believe he was the booker at this time) or was injured, but he's still advertised on house shows the third week in December so I have him listed in the SPOT Ratings. And a young preliminary wrestler named Shawn Michaels makes my list, coming in at number 10. 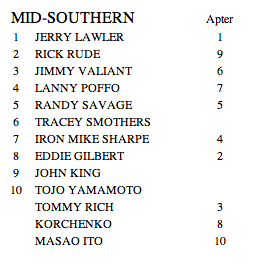 Rude was finishing up his run here, but in a situation similar to The Saint in Florida (and perhaps Ox Baker in Georgia), the fact that he's going under every night in top matches seems to affect his rating in the magazine. Tommy Rich was a regular in Georgia so I didn't put him in the SPOT Ratings here. Korchenko finished up here the first week in December (and he seems to disappear completely until 1986). Masao Ito hadn't been here since September, he was working in Georgia at the time so I don't know why he was listed in the magazine ratings. Similar to Georgia, the roster of singles wrestlers here is pretty thin, so my top 10 includes John King and Tojo Yamamoto, who were mid-carders (at best) at this time. 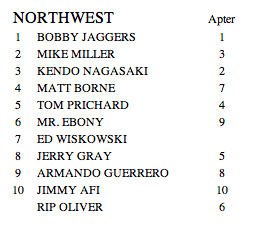 The (Pacific) Northwest SPOT Ratings line up pretty well with the magazine ratings; I'd say this territory and World Class are the two most similar. The primary difference is the magazine lists Rip Oliver instead of Wiskowski. My records show that Oliver finished up here the second week of December and goes to World Class, so I didn't include him in the SPOT Ratings. Mr. Ebony was Tom Jones under a mask, though in some towns he's billed as The Black Terror and in others he is billed as Mr. Ebony.
Stats 101