- November 06, 2019
Our coverage of 1975 continues with a look at the week ending November 9th: Andre competes in some battle royals with varying stipulations, Murdoch tries to find a partner to battle Kox & Robley, Sonny King does a SPOT rating flip-flop with Pork Chop & more! 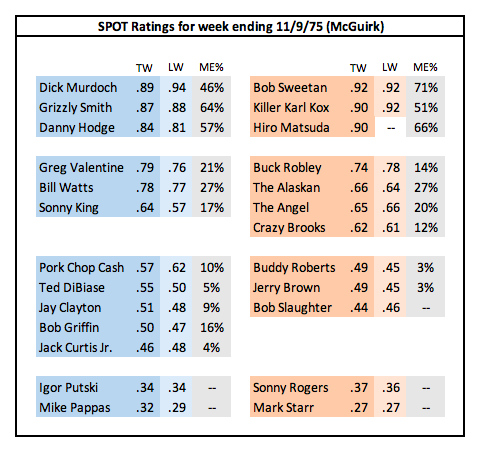 Notes/Analysis: Andre the Giant finished up his week-long run here, participating in battle royals around the loop. Andre competed only in the battle royals, while the other participants generally wrestled matches earlier in the card. Similar to the royal in Shreveport, most of these were advertised as each wrestler "putting up $1 per pound of bodyweight", with the local promoter kicking in an additional amount. In Tulsa, the winner would get $5440, in New Orleans it was $5225, in North Little Rock it was $4000, and in Alexandria, Jackson and Monroe it was an even $5000. In Tulsa and New Orleans, they were billed as two-ring battle royals. The newspaper article in New Orleans explained that everyone starts in one ring and try to throw opponents into the second ring, at which point they can be eliminated either by being thrown from the second ring to the floor or by being pinned. Jackson and Alexandria also specifically state that you could be eliminated by pinfall in addition to being thrown over the top rope. The only results I have are from Alexandria and North Little Rock, and Andre won both of those battle royals, so it wouldn't surprise me if he won all of them.

Dick Murdoch continues to feud with Killer Karl Kox and Buck Robley, and joined forces with a couple of different partners to face them during the week. In Tulsa and Jackson he teamed with Greg Valentine while in Alexandria and North Little Rock he teamed with Ted DiBiase. In Monroe, Kox & Robley took on the all-star team of Bill Watts & Danny Hodge. Watts also had bouts against Bob Sweetan in Alexandria and Bob (aka Sergeant) Slaughter in North Little Rock. Hodge faced Sweetan in a fence match (aka steel cage match) in Fort Smith.

In Baton Rouge, Grizzly Smith teamed with Bill Watts against Bob Sweetan and The Alaskan. However, after the babyfaces won the first fall, Grizzly was "injured" in the aftermath of the fall. Sonny King, who made his first appearance in Baton Rouge earlier in the night by defeating The Angel (Frank Morrell), took Grizzly's place and he & Watts emerged victorious. This seems to have been an angle to push the newcomer King, as the following week he gets a singles main event in Baton Rouge against Sweetan. King's SPOT rating this week increases from .57 to .64, putting him in the upper mid card category. Meanwhile, Pork Chop Cash's rating drops from .62 to .57. We saw something similar a few months earlier when Tom Jones was being phased out and Pork Chop was basically pushed into the spot Jones had previously occupied. Sonny would continue to be pushed, and his SPOT rating will briefly cross above .80 by the end of the year, signifying his status as a main eventer. Pork Chop stays in the territory for a couple more months, but his rating never gets back above .60 this time around.

No newcomers this week besides the returning Hiro Matsuda. We mentioned last week that Bill Dromo was finishing up and would head to Florida. Also leaving were Gene Lewis and Steve Lawler. Lewis goes to Gulf Coast, while Lawler's whereabouts are unknown until January 1976 when he too shows up in Gulf Coast.