- November 13, 2019
Our coverage of 1968 continues with a look at the week ending November 17th: the heels get their hands raised more often than usual, the Blue Demons are unmasked, a rookie named Robley pops up in Louisiana & more! 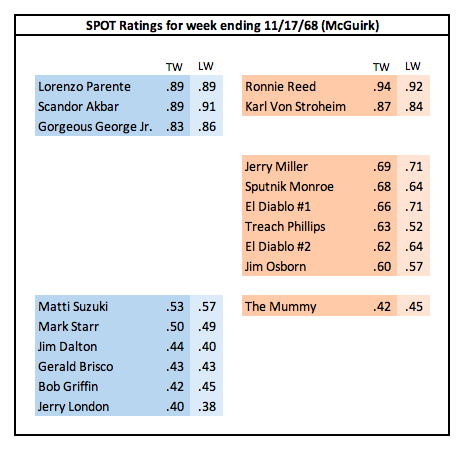 Notes/Analysis: This week saw the heel wrestlers coming out on top more often than usual. During this time period, there was a tendency to have the babyface wrestlers win more main event matches than they lost. Sometimes they were by disqualification or reverse decision, where the heel has the upper hand but gets caught cheating. If we view wrestling as a morality play, this fits in to the broad theme of good triumphing over evil in the end. Often the heels would win some of the preliminary matches to get the crowd riled up, and good would get their hand raised in the hand.

In Tulsa and Little Rock, Karl Von Stroheim beat Scandor Akbar in Texas rules (aka Texas death) matches. The semi-main in Tulsa saw Ronnie Reed beat Lorenzo Parente while in Little Rock Sputnik Monroe defeated Gorgeous George Jr. Reed also defeated Parente in the main event in Monroe. In Oklahoma City, a Russian roulette style battle royal was won by Sputnik, who defeated Mark Starr in the final match after they were the last two men in the ring in the battle royal.

The babyfaces didn't go empty-handed all week, as they got a taste of victory in some towns. In Springfield, Akbar won by disqualification over Reed, while Parente defeated Von Stroheim in Joplin in a match with no referee (the referee was stationed outside the ring and only entered to count pinfalls). The biggest win for the good guys, however, came in Shreveport, as Gorgeous George Jr & Danny Little Bear defeated Los Diablos in a hair vs mask(s) match. Diablos unmasked in the center of the ring, but when they gave their identities, they called themselves "Matt Burns" and "Rope Burns". No further information is available on their true identities, but I stand by my previous theory that Diablo #2 was Treach Phillips. They still never appear on the same card, with the Diablos booked on shows early in the week and Treach working as himself Thursdays through Saturdays. Treach starts to get a push this week, he teamed with Von Stroheim in Wichita Falls against Gorgeous George Jr & Lorenzo Parente. Results are not available for that card, nor are they available for Fort Smith (Parente vs Von Stroheim) or Longview (Akbar vs Reed in a brass knucks match).

One of the reasons the heels may have gotten the better end of things this week was the imminent return of Danny Hodge from injury. Hodge would resume a full-time schedule here next week. Since his primary foil Jack Donovan was still recovering, they may have been building up opponents for Hodge to face upon his return. So Reed and Von Stroheim in particular were kept strong while Treach Phillips and Sputnik Monroe were waiting in the wings, slowly moving up the cards as they won matches in the mid-cards. 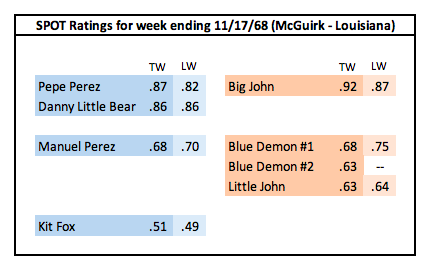 Notes/Analysis: Baton Rouge and Alexandria were headlined this week by Big John defending the Louisiana Heavyweight title against Pepe Perez. In Baton Rouge, Perez won by disqualification after interference from Little John. Big John also defended the title in Lafayette against Danny Little Bear in a match with two referees (one of whom was Little Bear's partner Kit Fox). While results for that match are not available, it appears that Big John held on to the title, perhaps in a similar fashion as in Baton Rouge. The main event for next week's Lafayette card has Big John defending against Little Bear inside of a "six-foot chain link fence" to prevent interference. Lafayette had two title bouts this week, as Manuel & Pepe Perez also defended the Louisiana Tag Team titles against The Blue Demons. That same match also headlined Loranger. Blue Demon #2 was absent from the cards for a couple of weeks, and it's entirely possible that this was a different person than the #2 who had been here previously.

The most interesting piece of info found in this area this week was a preliminary match in Alexandria, where The Blue Demon (presumably #1) faced a newcomer named Phil Robley. Robley, who gained fame as Buck Robley in the 70s and early 80s as a wrestler, manager and booker, had his earliest matches in August 1968 in Gulf Coast. He then spent about a month in Florida before returning to Gulf Coast in mid-October. This is the only advertised appearance I can find for him in this area, and his name doesn't show up again anywhere until early 1969 back in Gulf Coast.