- November 01, 2019
Our coverage of 1961 continues with a look at the week ending November 5th: Danny Hodge works the "B" towns, don't be the first person eliminated in a battle royal this week, why Mighty Bolo may have left the territory & more! 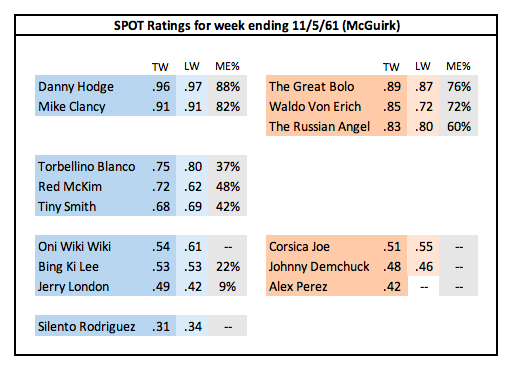 Notes/Analysis: With Mike Clancy fresh off a main event feud against Sputnik Monroe, he was booked again in main events most every night this week. In Little Rock and Springfield, he faced Waldo Von Erich in singles bouts. In Tulsa and Oklahoma City, they were on opposing sides of tag team bouts, Clancy teaming with Red McKim and Waldo teaming with The Great Bolo.

The Louisiana shows often featured wrestlers that only worked one or two times a week, and only in Louisiana. I generally don't include them in the SPOT ratings as I don't consider them full-timers. This week, Tony Neopolitan and Carlos Mendoza worked some of these shows. Neopolitan was definitely part of the "office" for Louisiana; his name frequently pops up on shows in the state both before and after the time periods where they used talent from the McGuirk crew.

As mentioned last week, Sputnik Monroe finished up the week prior. Also finishing up was The Mighty Bolo, who was Pepper Martin. In his book, Shrapnel of the Soul and Redemption, Martin claims to have had a disagreement with McGuirk over a backstage altercation Pepper had with Jerry London. Pepper then said Al Lovelock (The Great Bolo) told him that he overheard Leroy saying he was going to get Danny Hodge to break Martin's leg during an upcoming match, with Lovelock telling him he'd better leave the area right away. Pepper says he and his family packed up their trailer right then and there and "took off for Canada".

The only newcomer this week was Alex Perez. Perez (not to be confused with the 80s wrestler known  as Al Perez [or that guy's doppelgänger known as Seth Rollins]) had been wrestling since 1951, with most of that time spent in Amarillo. Prior to his wrestling career, Perez had been a boxer, winning regional Gold Gloves tournaments in 1948 and 1949 and then playing semi-pro baseball. Women wrestlers Judy Grable and Peggy Allen finished up their run here this week. Peggy appears to have left mid-week; in Oklahoma City, Nell Stewart was advertised opposite Grable in a mixed tag team match.