- November 05, 2019
Our coverage of Mid-South in 1979 continues with a look at the week ending November 11th: Mike George is scheduled to defend the North American title against Dick Murdoch but instead faces Bill Watts and the newspaper says Watts wins the title but I don't think he really did & more! 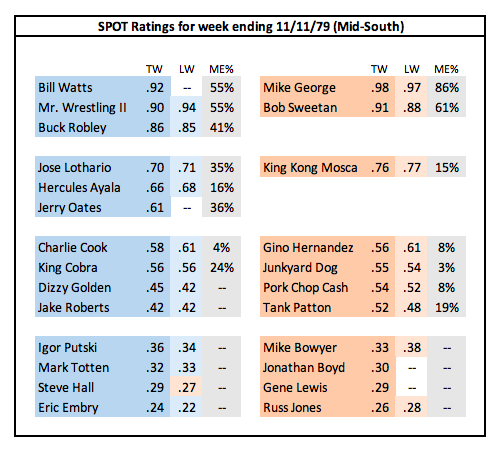 Notes/Analysis: The most interesting thing I found in my research for this week came from the show in Monroe on Sunday evening. The newspaper ad lists Mike George defending the North American title in the main event against Dick Murdoch. Other notable bouts on the card were Mr Wrestling II vs Bob Sweetan and Buck Robley vs Ivan Koloff. The results printed in the newspaper the day after the show say that George faced Bill Watts instead of Murdoch, and that Watts won the title when the referee stopped the match due to Sweetan "bleeding badly". I haven't found any mention of this being a title change in the generally reputable title histories. Furthermore, the ad for the next show in Monroe two weeks later lists George as the champion. So I have a feeling that this was one of two things:
1) what we call a "Dusty finish" where the fans went home thinking they saw a title change only to find out on the TV show the next week that the title didn't actually change hands (here it could be because there wasn't a pinfall or submission).
2) the newspaper "went into business for themselves" when they received the report. Since it had been billed as a title match and the challenger won, whoever wrote the blurb in the paper may have just assumed the title changed hands (this happens more than you may think).

In addition to being advertised in Monroe, Murdoch was also advertised for a title shot against George in Jackson. Murdoch was wrestling regularly in Amarillo, but this week looks to have taken bookings here as well as in Detroit and Kansas City. Both he and Ivan Koloff are not listed in the SPOT ratings chart this week as I consider both to be part-timers. Ivan continued his brief run here this week including matches in Monroe against Robley, against Wrestling II in Shreveport, and teaming with George against Robley & II in Greenwood.

In Shreveport, the Watts & Robley vs Sweetan & George match was billed as a Texas Tornado match, and was won by Watts & Robley. Most title histories have Watts & Robley winning the belts on November 12th with no city listed (it likely would have been New Orleans) but it's possible this was a title change. The Ayala-Mosca bout in Shreveport was billed as the winner getting a future title shot against North American champ Mike George. Mosca won the bout, but it doesn't appear that he gets a title shot on any future Shreveport cards.

Bill Watts and Jerry Oates return to the SPOT rating chart this week as they're both on the road regularly. The two newcomers are Jonathan Boyd, who came in from Georgia, and Gene Lewis, who came in from Stampede. Steve Hall (who I believe is Tom "Rocky" Stone) also found himself wrestling against heels starting this week after usually wrestling against babyfaces, so I moved him from the heel side to the babyface side. I doubt there was an actual turn involved; it just seems that with two new heels coming in and working the prelims, they needed to even things out so switched Hall over to the face side.