- November 04, 2019
Our coverage of 1982 continues with a look at the week ending November 7th: JYD faces Kamala in Baton Rouge in what may be their first-ever match against one another, Brad Armstrong comes in for the week, someone may have lost their mask in Shreveport & more! 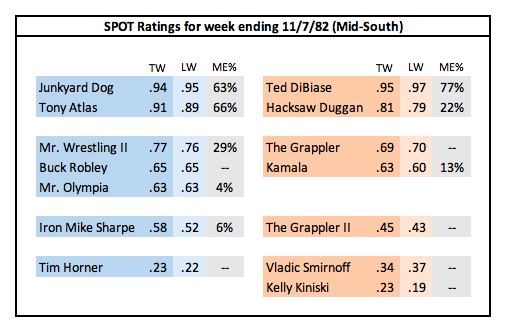 Notes/Analysis: Junkyard Dog is advertised as himself on the three shows he's booked on this week. In Shreveport, he was left off the card, so the TV angle taped on 10/27 may have already aired there. JYD & Mr Olympia are still billed as Mid-South Tag Team champions in Jackson, where they defended the titles against The Grapplers. Other known title matches for the week included Ted DiBiase defending the North American title in Jackson against Mr Wrestling II and in Shreveport against Tony Atlas (Atlas won that match by disqualification). DiBiase also faced Atlas in Little Rock in what may have been a title match. Hacksaw Duggan defended the Louisiana Heavyweight title in Shreveport against Brad Armstrong. Duggan had won the title from Iron Mike Sharpe at the October 13th TV tapings.

Armstrong came in from Georgia just for the week; in addition to the Shreveport match, he also faced Duggan in Jackson (the paper did not list it as a title match, but it may have been). In Baton Rouge, Brad fought Kelly Kiniski. Also in the territory this week but not as a regular was Terry Gordy. He took on Mr Olympia in Baton Rouge and faced Buck Robley in Jackson, Shreveport and Little Rock. The Jackson bout was billed as a bounty match. I did not list Armstrong or Gordy in the SPOT ratings since they're just visiting, but both would have had a similar SPOT rating as Iron Mike Sharpe this week as mid-carders.

The main event in Baton Rouge was billed as a "battle of the undefeated" as JYD took on Kamala in what was possibly their first-ever singles bout. They may have had a match in New Orleans prior to this, but we don't have good records from the weekly Monday night shows there. Kamala won the bout, as the following week he continued to be billed as undefeated in Baton Rouge. With JYD about to "leave town", it makes sense for him to put over Kamala here to build him up as a heel.

An interesting stipulation bout took place in Shreveport as The Grapplers faced Mr Wrestling II & Mr Olympia in a match where the loser of the fall would have to unmask. II & Olympia won the bout, but I have no details as to whether Grappler I (Lynn Denton) or Grappler II (Tony Anthony) took the fall. Both were about to leave the territory. They wouldn't come back until 1985, at which point they were unmasked and teaming as The Dirty White Boys. So either one of them could have unmasked here.