- October 03, 2019
Our coverage of 1968 continues with a look at the week ending October 6th: a crack in the case of "who were the Blue Demons" that goes against conventional wisdom, Jack Donovan does well in tag team title matches but not so well in singles title bouts, & more! 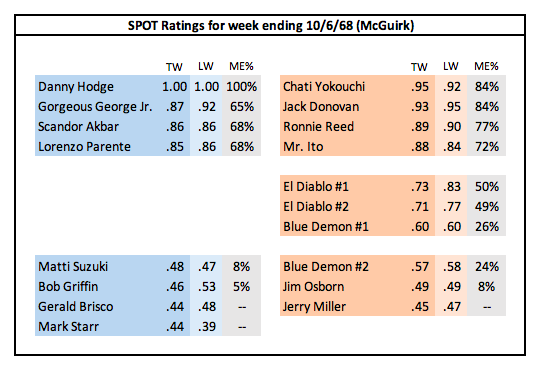 Notes/Analysis: The mystery of who (this version of) the Blue Demons were took an interesting turn since my last update. I dug a little deeper into some newspaper research and found that Tamayo/Tomayo Soto, who is generally believed to have teamed with Frank Martinez here as the Demons, was working for Gulas. His name appears in numerous ads in the Gulas towns of Montgomery, Huntsville and Memphis through mid-September and all of October. Actual results are slightly harder to come by, but I did find two instances of Tamayo being listed in Gulas results on nights the Blue Demons worked here. So I really don't see how he could have been one of (this version of) the Demons. Frank Martinez and Al Greene (who had teamed with Martinez as the Demons for Gulas shortly before they showed up here) don't seem to have any listings in other territories at this time, so it still could have been the two of them. But in a bit of foreshadowing, things will get even more confusing starting in November.

Jerry Kozak, Haystack Muldoon and Frankie Fargo left the territory. Kozak returned to his home base of Amarillo while Muldoon went to Mid-Atlantic. There seem to be no further listings for Frankie Fargo after this brief run. As I previously speculated, it's possible this was Don Fargo killing some time after being run out of Louisiana and before starting for Dick the Bruiser, though I have no actual proof of that. I have also temporarily removed Karl Von Stroheim from the SPOT ratings. He spent most of this week and last week in lower Louisiana with Chati Yokouchi & Mr Ito. Yokouchi & Ito did make at least one appearance in this part of the territory in both of those weeks, but Von Stroheim worked solely as their manager on those occasions.

With Kozak leaving, the US Tag Team titles were squarely back around the waists of Jack Donovan & Ronnie Reed. They defended them in Tulsa, Little Rock and Springfield against Danny Hodge & Lorenzo Parente, winning all three bouts. The next two nights, Hodge defended the NWA World's Junior Heavyweight title against Donovan. The match in Longview had two referees, one of whom was Longview matchmaker Leonard Clay. The match in Oklahoma City was billed as "winner-take-all", which generally refers to purses; i.e. the winner gets both the winners and losers share of the (kayfabe) purse and the loser gets nothing. In Longview, the match was set up the previous week when Donovan pinned Hodge but didn't see Hodge's leg on the bottom rope. As Donovan argued with referee Jerry Usher, Hodge got him from behind to win the match. I don't have results from Longview this week, but Hodge won the OKC bout.

Donovan's wife had a slightly better week than her husband. Mrs. Jack Donovan (Verne Bottoms) defeated Jessica Rogers in Little Rock and Springfield. In Joplin, she teamed with her husband to face Gorgeous George Jr & Carmen Monge, but results are not available.

Some of the other towns were headlined by Los Diablos feuding with Gorgeous George Jr. In Monroe and Fort Smith, George teamed with Scandor Akbar to face them (with George & Akbar winning in Monroe), while in Wichita Falls George teamed with Lorenzo Parente. On that card, Akbar faced Gerald Brisco in a preliminary match. A newspaper article built up this babyface vs babyface match by saying Akbar is a friend and ally of Gerald's older brother Jack, and is "testing" the younger Brisco on Jack's behalf. 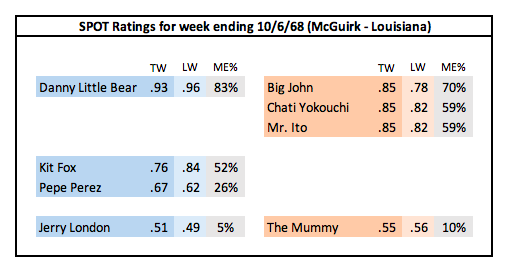 Notes/Analysis: A unique three-man team appeared in Baton Rouge and Chalmette to take on Chati Yokouchi, Mr. Ito & Karl Von Stroheim. Babyfaces Danny Little Bear & Kit Fox teamed up with Big (Bad) John, who was a heel in all the towns. It seems to be just for this week, as John returns to the heel side of things next week. In the newspaper ad for the Baton Rouge show, it says John "dislikes Japs & Germans", so there you go. It should also be noted that the results for both shows had the Little Bear, Fox & Big John winning and showing no signs of dissension.

Despite them being on apparently friendly terms in Baton Rouge and Chalmette, Little Bear and Big John faced off twice this week in Texas death matches. Those bouts took place in Alexandria and Lafayette. The Alexandria newspaper lists it as a "Texas tornado" match, but then lists the rules for the match as being identical to a Texas death bout. Big John found himself in another Texas death match in Loranger, this time against Pepe Perez. The newspaper ad also lists one additional twist to the rules, which is something that I've seen pop up occasionally in Texas death matches around this time. In addition to the traditional rules, each fall will cost the loser $25 (which would go to the winner of said fall). Given that Texas death matches often had a large number of falls, that was a pretty significant twist. Especially when you consider that $25 in 1968 is the equivalent of about $180 today. When I've seen detailed results from matches with that stipulation, it generally appears the babyface wins more falls than the heel (often by a significant margin) but the heel ends up winning the match.

Buddy Austin and Oni Wiki Wiki were each booked on two cards this week. Wiki Wiki seems to have been working in the office here along with Billy Golden. He also refereed on occasion and was usually the "go-to" sub when an advertised wrestler did not appear. Austin's name shows up sporadically over the course of the year. here I don't believe it was the well-known wrestler Buddy "Killer" Austin, as he was in Southern California at this time.