- October 09, 2019
Our coverage of 1975 continues with a look at the week ending October 12th: a step-by-step look at how the beginning of Murdoch's babyface run played out, Bill Watts returns, notes on the weekly schedule for a couple of Louisiana towns, Matsuda defends the World's Junior Heavyweight title against various babyfaces & more! 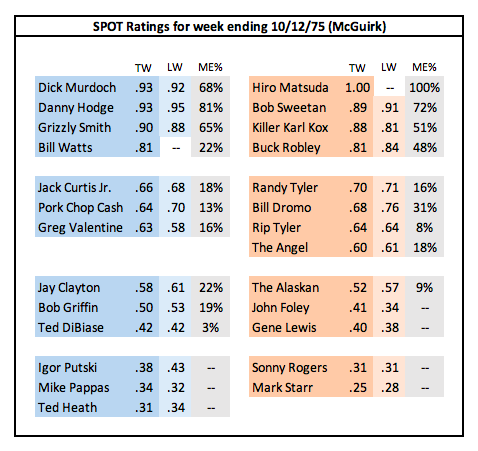 Notes/Analysis: NWA World's Junior Heavyweight champion Hiro Matsuda and Bill Watts returned to the house show circuit this week. Matsuda is here for the week, goes to east Texas for a week, then returns here. Watts is on the cards regularly for the next couple of months. Looking at the SPOT ratings, there is evidence that Watts is taking a back seat to Dick Murdoch for the role of "top babyface heavyweight". We also see evidence of this in Watts' Percentage of Main Events score (ME%), which is a 22%. That is a lower score than any of the other main eventers; it's also lower than upper mid-carder Bill Dromo and identical to mid-carder Jay Clayton. Reports are that Murdoch was super over as a face at the time, so Watts basically takes a back seat and lets Murdoch have his run on top. Notable bouts this week for Watts included teaming with Danny Hodge in Wichita Falls to face Killer Karl Kox & The Angel and teaming with Jay Clayton in Fort Smith against The Angel & The Alaskan in the semi-final, with the main event there being Hodge vs Bob Sweetan.

Murdoch faced Sweetan in a brass knuckles match in Tulsa and beat Buck Robley in Baton Rouge on Wednesday. Murdoch also took on Kox twice during the week, in a bounty match in Shreveport and a brass knuckles bout in New Orleans. Looking back, we see that the Murdoch babyface turn had this following basic plot on the house shows (with variations from town to town): Robley and/or Kox interfere in a big Murdoch singles bout in an attempt to help him but then turn on him afterwards, Murdoch defeats Robley in a loser leaves town match, Robley puts a bounty on Murdoch's head and various heels try to collect, then Murdoch finally gets a bout with Kox. As mentioned previously, the loser-leaves stip didn't happen in every town so Robley is still working some house shows, and I believe he is managing Kox, Matsuda and The Angel as well.

Baton Rouge was run twice this calendar week, on Wednesday and Sunday. The Sunday card was in place of next week's regular Wednesday card. The main event on Sunday was Grizzly Smith vs Bob Sweetan. Monroe switched nights to Fridays starting this week. Monroe had been run on Tuesdays dating back to when McGuirk first started running the town in 1961, but in April of 1975 it was switched to Mondays. After six months on Mondays, promoter Larry Tillman (per the local newspaper) switched it to Fridays. This would only last for a few months, with it moving back to Mondays in January 1976. The first Friday night card there featured Matsuda defending his title against Danny Hodge. Matsuda also defended against Hodge in Lake Charles. In New Orleans, he faced Greg Valentine with the newspaper article not specifying if the title was on the line. He did defend the title against Jay Clayton in Tulsa and Greenwood this week. Clayton was primarily used in the mid-cards, but his stock had risen enough from teaming with Hodge a couple of months earlier that he could be moved up the card for a big match. Given his affiliation with Hodge, we can also view this as Clayton being a placeholder opponent in some towns to build to Matsuda vs Hodge, which of course is the money match in the Junior Heavyweight division.

Other main events this week featured Grizzly Smith, who was feuding with Bill Dromo and Bob Sweetan in some of the smaller towns in Louisiana and Mississippi. In Greenville, he faced Dromo in a lumberjack, winner-take-all match. There was another winner-take-all match in Loranger, with Grizzly teaming with Bob Griffin against Sweetan & Randy Tyler. That card also featured a special 10 minute challenge bout between Sweetan and Griffin that took place before the main event. The stipulations were that Sweetan must defeat Griffin within the 10 minutes or forfeit $100 to him. I don't have results, but if I had to guess I'd say Griffin lasted the full ten; it's a moral victory for the babyface while the heel technically doesn't lose. This was a fairly common booking trope at the time to build up a babyface; in fact, we will see it again with Ted DiBiase in the near future when he has similar challenge matches against Killer Karl Kox.

George Strickland and Hippie (Mike) Boyette left the territory. Boyette went to Gulf Coast, while Strickland's name next shows up in early 1976 on some small shows in Ohio and Kentucky. Four midget wrestlers came in for a two-week stint, babyfaces Bobo Johnson & Sonny Boy Hayes and heels Billy the Kid & Little Tokyo. They generally worked in the middle of the card, their SPOT ratings ranged from a .62 to a .64 during their stay.