- October 31, 2019
Our coverage of 1968 continues with a look at the week ending November 3rd: Sonny the Wrestling Bear works against various heels, a feud between "Gorgeous" and "Handsome", Sputnik lands in Lafayette & more! 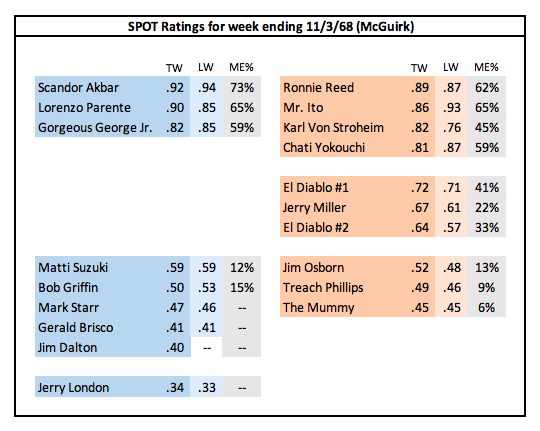 Notes/Analysis: Sonny the Wrestling Bear continued his tour here, working against Ronnie Reed in Tulsa, Karl Von Stroheim in Longview and the team of Chati Yokouchi & Mr Ito in Little Rock. For that match, a stipulation was added that if Yokouchi & Ito left the ring they would not be paid for the match. The Japanese team also met Danny Little Bear & Kit Fox in Longview. Little Bear & Fox primarily worked the lower Louisiana circuit, but often worked Monday nights in Shreveport and worked in Longview this week as well.

Other major matches were Gorgeous George Jr vs Ronnie Reed (who was nicknamed "Handsome" Ronnie Reed) and Scandor Akbar vs Karl Von Stroheim. George and Monroe fought in Monroe and Springfield. In Monroe, the two fought to a time limit draw, with the show drawing a reported 1500 fans. In Springfield, Reed won the bout, while Akbar beat Von Stroheim in the main event. Akbar also beat the German star in Tulsa, Little Rock and Oklahoma City. The OKC show was headlined by Reed defeating Lorenzo Parente.

In Shreveport, Parente teamed with Gorgeous George Jr in a losing effort against Los Diablos. In Fort Smith, Parente fought Diablo #1 in a match where #2 was handcuffed to the ringpost. This looks to be a similar angle to the one run in Shreveport last week involving Los Diablos and George.

In Wichita Falls and Joplin, stipulation matches between some of the mid-carders were featured. In Wichita Falls, Bob Griffin and Jim Osborn got the main event slot in what was billed as a grudge match to the finish. In Joplin, Gerald Brisco took on Treach Phillips in a (Texas) death match in the semi-main event.

The only newcomer this week was Jim Dalton, who had last been here earlier in the year (leaving at the end of February). He came in from Florida, and had numerous stints here over the years dating back to his first appearances in the territory as Ronnie Fargo, "brother' of Don Fargo.

While Frank Dalton wasn't advertised on any shows this week, he did appear on at least one. Dalton subbed for Blue Demon #2 in Baton Rouge, taking on Kit Fox in the opener (Fox won the match by disqualification). Results for the other three shows I have this week are not available, but it's certainly possible that Demon #2 missed those shows as well. Demon #2 isn't advertised for any shows next week, then returns the following week. This means that two separate people could have played that role, with the first one leaving (or being injured) this week and another person filling in starting in two weeks. Or it could just mean #2 was injured and took a week or so off. Unfortunately, we may never know the answer.

The main event in Baton Rouge was Little Bear taking on Blue Demon #1 in a match where both mean wore "kid gloves". The way the stipulation is advertised, the use of kid gloves instead of regular boxing gloves meant it was "just about (a) bare knucks" fight. Demon #1 won the match by countout after loading his glove with a foreign object and knocking Little Bear out of the ring.

Sputnik Monroe was advertised for a one-off appearance in Lafayette, taking on Kit Fox in the opener. Sputnik had just finished up a run in Florida and would start on the "main" McGuirk circuit next week. My research shows that Sputnik was at one point married to Midge Bell, who was the local promoter in Alexandria (90 miles from Lafayette). So it could be that Sputnik went home to be with his family for a few days in between territories, and took a booking to earn a little cash while "on vacation".