- October 25, 2019
Our coverage of 1961 continues with a look at the week ending October 29th: Sputnik gets two title shots plus has a big loser leaves town cage match, in case an alligator wasn't enough we also have a bear this week, Torbellino Blanco gets some main events & more! 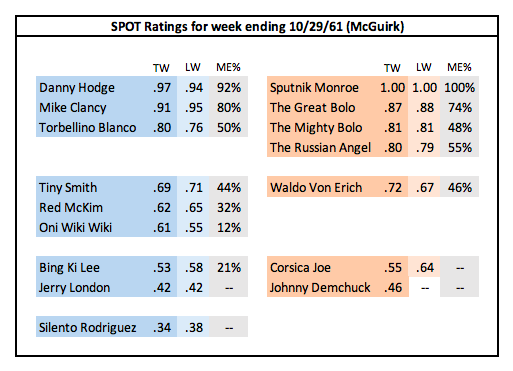 Notes/Analysis: Sputnik Monroe finishes up his run here this week. His feud with Mike Clancy was for the most part finished up, with Clancy winning in some towns last week but Sputnik winning in others to set up matches with Danny Hodge this week. He did face Clancy one last time this week in Springfield, in a loser leaves town match with the ring surrounded by a wire fence. Clancy won that bout to send Sputnik packing. Prior to that, Monroe fought Hodge for the NWA World's Junior Heavyweight title in Tulsa and Little Rock, with Hodge winning both bouts. The results from Little Rock state that Hodge won the match in two straight falls. While most two-out-of-three falls matches saw wrestlers split the first two falls to build suspense, promoters occasionally had a wrestler win in two falls. To me, this was a touch of realism; if every single 2/3 falls match had the same basic plot, fans would get smartened up. It's similar to how New Japan occasionally has a very short match involving top guys in order to condition fans that the finish could happen at any time. Hodge overtook Clancy this week for the highest babyface SPOT rating after Clancy spent three weeks in the #1 spot. On the heel side, Sputnik had a "perfect" SPOT rating of 1.00 this week, meaning he was in the main event of every show he was booked on. After leaving here he goes to East Texas. It appears he won the Texas Heavyweight title on his very first night in the territory, beating Dory Dixon in Houston on Friday October 27th.

Hodge also defended his title in Fort Smith against Great Bolo in a rematch from last week. This time, Hodge won the bout outright, winning the first and third falls. Also in Fort Smith, Corsica Joe took on a wrestling bear. The bear, trained by Tuffy Truesdale, was billed in Fort Smith as "Ted", but it actually was the bear commonly referred to as Victor. The bear was here for this week and next, and every other town billed him as Victor. There was another bear known as Terrible Ted, trained by Canadian wrestler Dave McKigney aka Gene DuBois, but this particular bear was Truesdale's. Tuffy had been here for a couple of weeks wrestling against an alligator, and this week brought the bear along as well. Victor also competed in a battle royal in Stillwell, while Tuffy took on the alligator in Oklahoma City.

Oklahoma City was headlined by a tag team match pitting Hodge & Tiny (aka Grizzly) Smith against Great Bolo & Waldo Von Erich, with the babyfaces winning. Torbellino Blanco found himself main eventing in two of the Louisiana towns, taking on Great Bolo in Shreveport and The Russian Angel in New Orleans, plus main-eventing against Mighty Bolo in Jackson. Blanco's SPOT rating hit .80 this week, putting him in the "main eventer" category for the first time. The Shreveport card drew 900 fans, down from last week's attendance of 1100 but still above what the town had been averaging.

In addition to Truesdale and his assorted animals, women wrestlers Judy Grable and Peggy Allen continued their run here. This week they mostly worked in singles bouts after spending last week doing mixed tag matches. The one newcomer was Johnny Demchuck. Demchuck wrestled primarily in Canada and the US west coast over a 20 year career, but like most wrestlers of the era he spent a little bit of time almost everywhere. This was his first time in this territory in over a decade. On June 16th 1962, Demchuck was wrestling Oliver Winrush in Victoria, British Columbia, when his body suddenly stiffened up and he collapsed. He was transported to a nearby hospital but was pronounced dead on arrival of a suspected heart attack at the age of 49.