- October 22, 2019
Our coverage of Tri-State in 1979 continues with a look at the week ending October 28th: I do a little detective work to find out what happened to Shaft (see what I did there?), top babyfaces play musical chairs against Shikina & Sugar Bear, some interesting background info on Herb Calvert & more! 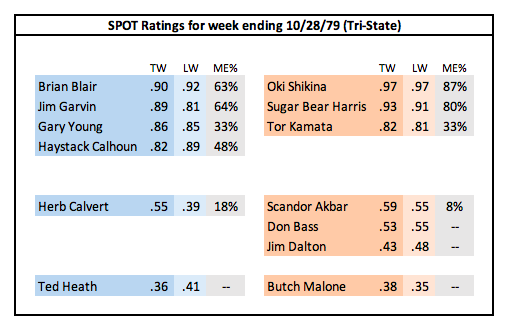 Notes/Analysis: Last week, I mentioned that Troy Graham and Tom Shaft did not appear in Tulsa after being advertised. It looks like they finished up with the territory a little earlier than originally planned. They're not advertised at all this week. Both show up in Southeastern before the end of October. Shaft only stays there for a couple of weeks and then goes to Georgia.

Tulsa this week was to be headlined by Brian Blair & Jim Garvin taking on Oki Shikina & Sugar Bear Harris. However, Gary Young subbed for Blair and he & Garvin won the bout. The Springfield show had Blair & Young vs Shikina & Harris advertised as the main, while in Little Rock it was again Blair & Garvin advertised to take on the same heel team. Shikina & Harris still appear to be the US Tag Team champions but only the Little Rock ad explicitly lists the titles being on the line.

Also on the Tulsa show, Herb Calvert defeated Tor Kamata in what was likely framed as an upset. Realistically, Kamata was finishing up in the territory and put the young babyface over on his way out. Calvert had been captain of his high school wrestling team in Clifton, New Jersey and wrestled at the University of Oklahoma as a heavyweight. In the 1976 season he scored 18 pins for OU, which may have been the most recorded by an OU heavyweight up to that point in time. In the second semester of his junior year, he was ruled scholastically ineligible and removed from the team. In November 1977, he represented the OKC Athletic Club in a wrestling tournament open to both collegiate and non-collegiate wrestlers. That would have been his senior year, but I am under the impression he was not enrolled in OU at that time. The first mention I can find of his name in the pro ranks was a McGuirk/Watts show in Oklahoma City on August 29, 1978. He also had stints as a regular in Florida and Southeastern. After just a few years in pro wrestling, Calvert became a Deputy with the Tulsa County Sheriff's Department and later worked for a vending machine company, earning him the nickname "The Candy Man". Herb passed away at the age of 45 in 2002.

Here is a link to video of a match from Florida in 1978 between Calvert and Jim Garvin, which gives you an idea of Herb's size. In Florida he was sometimes billed as Herb "Hulk" Calvert.
https://www.youtube.com/watch?v=AFu0fKA98ss

Other notable matches on the cards this week were Haystack Calhoun vs Don Bass in Tulsa, Jim Garvin vs Jim Dalton and Scandor Akbar vs Ted Heath in Springfield, and Gary Young vs Butch Malone in Little Rock. Gypsy Joe was advertised to face Ted Heath in Tulsa, though he actually faced (and defeated) Silvano Sousa. Gypsy had worked a few shows for Gulas earlier in the month and shows up in Amarillo later in the week, so it looks like he just took a booking here to break one long trip up into two smaller ones. Also booked here this week was Gino Caruso. This was not the northeastern-based indie wrestler of the late 90s & early 200s; it seems to have been the wrestler better known as Pete Sanchez. And just like Gypsy Joe, it appears that Sanchez worked here in between stints with the WWWF and Amarillo. Another wrestler with a few bookings here this week that I have no information on was Silent Cloud. He was booked on all three shows, definitely worked Tulsa, and then has no further appearances here.