- October 24, 2019
Our coverage of 1968 continues with a look at the week ending October 27th: Karl Von Stroheim is locked in a cage (...despite all his rage...), bears apparently can't wrestle in Missouri, are Treach Phillips and El Diablo #2 the same person?? & more! 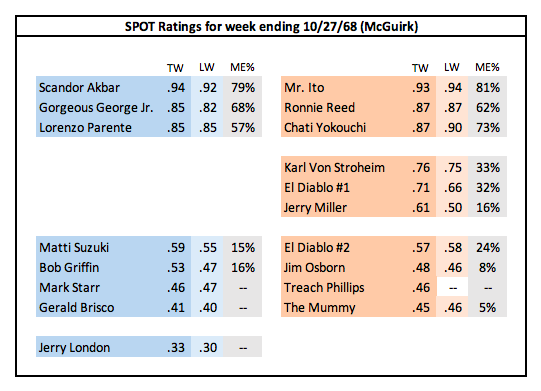 Notes/Analysis: This week the three top babyfaces (Scandor Akbar, Gorgeous George Jr & Lorenzo Parente) are feuding with the heel triumvirate of Chati Yokouchi, Mr Ito and manager/wrestler Karl Von Stroheim. In Tulsa, Little Rock and Springfield, Yokouchi & Ito wrestled in the main event against different combinations of the babyfaces, with Von Stroheim locked inside a small cage at ringside to prevent his interference. In Tulsa and Little Rock it was Akbar & Parente while in Springfield it was Akbar & George. In Wichita Falls it was a six-man tag with Yokouchi, Ito & Von Stroheim against George, Parente and mid-carder Bob Griffin. In Oklahoma City, it was Akbar & George against Yokouchi & Ito with two referees.

Gorgeous George Jr was also feuding with Los Diablos in Shreveport. This week, he took on Diablo #1 in a match with #2 being handcuffed to the ringpost. This had been set up by a tag team match the previous week where George's partner, Jerry London, was unable to continue and George took on both Diablos by himself, winning by disqualification when he was double-teamed. This week George won the match, but afterwards #2 was able to escape the cuffs and the heels again lay a 2-on-1 beating on George.

The other main attraction on the shows this week was the return of Sonny the Wrestling Bear (along with his trainer Nick Adams). Sonny had been here for two weeks in late August/early September, and last week worked the lower Louisiana circuit. This week, he took on Ronnie Reed in Shreveport, Fort Smith and Oklahoma City. He also faced Los Diablos in a handicap match in Monroe and Jim Osborn in Wichita Falls. Sonny was also booked in Joplin, but apparently there was a law on the books in Missouri prohibiting wrestling bears. So instead of being in an actual match, Sonny was advertised as getting in the ring after the matches were over and "performing", including a demonstration of various holds.

Joplin also saw the first appearance in a while of Treach Phillips in the territory...OR WAS IT?!?!? In my research, I noticed that an ad for a battle royal in either late 1968 or early 1969 billed Treach as an "ex-Diablo". I've seen numerous similar references to wrestlers when they were unmasked but continued to work the territory under their "real name". So I dug deeper. While El Diablo #2 and Treach Phillips both have regular bookings in the territory over the next month or so, neither of them are booked every night. After that point, Diablo #2 is gone and Treach is booked most every night. Furthermore, I haven't found a single instance of Treach and #2 both being booked on the same night (either in the same town or one in one town and one in another). So I dug even deeper. Diablo #2 made his first appearance here in November 1967. The same week he debuted, Treach was booked as himself in Longview, but that's the only appearance I can find for him between November and the end of the year. In the spring of 1968, Treach wrestles for about a month in East Texas. For that entire period, Diablo #2 is not advertised on any shows here. The dates line up almost perfectly and seem to indicate that Treach was Diablo #2. I can't prove it, but I'm about 95% confident in my detective work on this.

With the heel side being a little stale at the top of the cards (Yokouchi, Ito, Reed and Von Stroheim had all been here for several months, plus Jack Donovan was still injured), Jerry Miller starts moving up the cards. His SPOT rating went from a .50 to a .61, putting him in the upper mid-card category. It will continue to go up over the next couple of weeks, but he doesn't break through to the main event category (.80 and above).

Notes/Analysis: After spending a couple of weeks on the main McGuirk circuit, women wrestlers Barbara Owens, Betty Bouche (Boucher), Donna Christantello (Christianello) and Toni Rose spend the week here. They wrestle in tag team matches every night, though it seems they are paired up in different combinations on different nights.

The Blue Demons are now billed as the Louisiana State Tag Team champs, and defend their title against Manuel & Pepe Perez in Loranger and Lafayette. The match in Loranger is billed as a Texas Tornado match, however the stipulations listed seem to actually be for a Texas Death match (one minute rest period between falls, match continues until one team can't answer bell, each fall costs losing team $25). Danny Little Bear is billed as the Louisiana State Heavyweight champion, and defends the title in Lafayette against Big John in an Indian Death match, which seems to be what most places would call an Indian Strap match.

Little Bear also faces Blue Demon #1 in a one-fall to a finish match in Baton Rouge. The newspaper article for that card states that last week, Little Bear unmasked Demon #1 briefly during a tag match and that Demon was "a dead ringer for Louis, who's been touring across the country for four or five years as a wrestling referee". Recall that common wisdom has The Blue Demons here as Frank Martinez & Tamayo Soto, but I've uncovered a tiny amount of evidence to the contrary. I have no idea who the "Louis" that the paper refers to could be, but this just adds to the mystery of who the Demons were for this run.