- October 04, 2019
Our coverage of 1961 continues with a look at the week ending October 8th: Sputnik Monroe & Mike Clancy feud in several towns, a wrestling animal comes to the area (and it's not a bear!), Danny Hodge takes on a protege of his in a rare matchup in Tulsa & more! 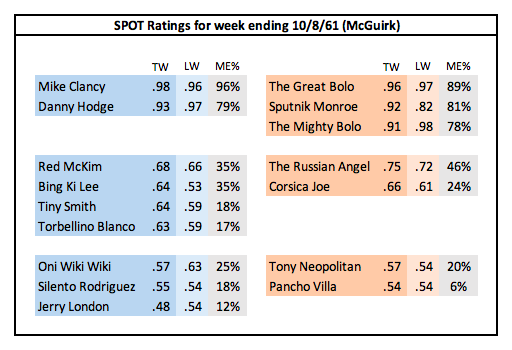 Notes/Analysis: Sputnik Monroe continued his climb up the cards this week, with his SPOT rating increasing from a .82 to a .92 as he's main-eventing against Mike Clancy in several towns this week. In Springfield, the two went to a no-contest, while Sputnik defeated Clancy two nights later in Oklahoma City. In Wichita Falls, they were on opposing sides of a tag team match, with Clancy & Danny Hodge beating Sputnik & The Russian Angel. They were also on opposing sides of a six-man tag in Little Rock, with Clancy's team pulling out the victory in that one as well. With all the main events against Sputnik, Clancy moves ahead of Danny Hodge in the SPOT ratings. That is a sign that the feud between Clancy and Sputnik was drawing, as they likely kept it on top of the cards for as long as it put asses in seats. In fact, the newspaper article hyping up the match between the two presents it almost as a tuneup for Sputnik to move to a match with Hodge; the fact the bout actually went to a no-contest could be an indication that it drew well there (unfortunately, I don't have much in the way of attendance figures from this era) and they decided to stretch the feud out in that town.

Hodge defended the NWA World's Junior Heavyweight title in Fort Smith against Corsica Joe, winning and retaining after Corsica was disqualified in the third fall. They also found themselves on opposite sides of two six-man tag team bouts this week.

In Tulsa, the promotion ran at the State Fair this week instead of their normal venue (Cimarron Arena); advertised was a 10-man Russian roulette style battle royal with four singles bouts to follow (so the first two men eliminated in the royal would be done for the night "with no pay", then #3 eliminated would face #4, #5 vs #6, etc). The final match on that card featured the last two men in the royal, Mike Clancy and Pancho Villa, with Clancy winning. A very interesting bout took place on that card: as a result of the order of elimination, Red McKim faced Danny Hodge. Both were babyfaces, and McKim was often billed as a protege of Hodge's. The match went to a time limit draw.

A very unusual newcomer came to the territory this week, as Tuffy Truesdale wrestled a 7-foot alligator in New Orleans and Jackson. While Tuffy is probably better known as the handler for Victor the wrestling bear, the first animals he wrestled were alligators. Most of the time these exhibitions were not part of wrestling shows, but rather on the sport show circuit, which I believe were trade shows for hunters, fishermen, etc. An article in the Milwaukee Sentinel in 1956 mentions Truesdale and his alligator (a 75-year old gator named Rodney) appearing at one of these sport shows. As a general rule of thumb, I don't list special attractions in the SPOT ratings, and I certainly don't rate animals (except perhaps George Steele). Since Truesdale only wrestles against the alligator while he's here, I consider him part of the special attraction as well and don't have him listed (though if I did, he and the alligator would have had a .62 SPOT rating).

Happy Humphrey left the territory, heading to Central States. In his absence, a few of the babyfaces move up slightly in the SPOT ratings. Bing Ki Lee, Tiny Smith and Torbellino Blanco all move up above the .60 rating that I use to separate "upper mid-carders" from "mid-carders".