- October 16, 2019
Our coverage of 1968 continues with a look at the week ending October 20th: several cards changed due to the injuries to Hodge and Donovan, a rare mid-card feud takes place between Bob Griffin and Jim Osborn, Frank Dalton returns to Louisiana but so does a BEAR & more! 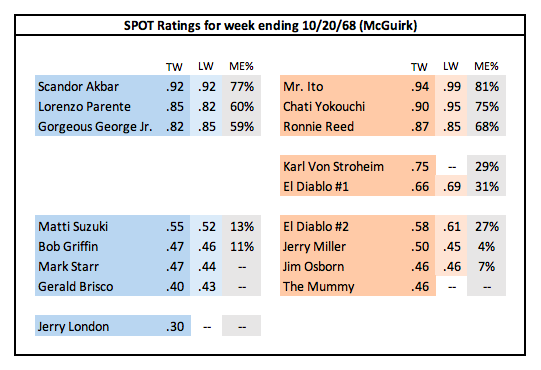 Notes/Analysis: With Danny Hodge and Jack Donovan both out of action due to last week's incident in Oklahoma City, they have been removed from the SPOT ratings. Several of the cards were changed from what was originally advertised this week due to their injuries. This allows us to get a good idea of how far in advance the ads and press releases were sent to the newspapers. The incident happened Friday night in Oklahoma City, with a story about it hitting the AP wire and being published in several newspapers over the weekend. The ads for the Monday and Tuesday shows this week still had Hodge and Donovan listed, and even the write-ups that appeared in the papers the day of those shows listed them as being in action that night. Neither were scheduled for Fort Smith or Springfield on Wednesday, and by Thursday the papers had been made aware of the changes to the card; Longview makes a point of mentioning that the originally scheduled Hodge & Akbar vs Donovan & Reed match was changed to a singles bout between Akbar and Reed.

In Shreveport and Monroe, The Viking subbed for Donovan. This was probably Bob Morse, who was working as The Viking in Central States at the time. In Shreveport, Jessica Rogers subbed for Mrs Jack Donovan in the 5-woman battle royal on that show. Results from the Monroe show the following night list Mrs Donovan as having participated in the battle royal there. Tulsa was headlined by a Russian roulette-style battle royal; Hodge was among the advertised participants but obviously did not compete. In Little Rock, Bob Griffin subbed for Hodge, teaming with Lorenzo Parente to face Chati Yokouchi & Mr Ito. That bout had some interesting stipulations (which may or may not have been adhered to after the change in participants). It was advertised as a 3 out of 5 falls match with two referees, with Yokouchi & Ito's manager, Karl Von Stroheim, to be fined $25 every time he enters the ring (except for between falls, when he was allowed to enter to manage/advise his men).

A feud between Griffin and Jim Osborn (the future Dr. X) was brewing on the mid-cards in the two Texas towns McGuirk ran. Last week in Longview, they met in a winner-take-all Texas rules (aka Texas death) match. This had been built up over several weeks with Griffin & Osborn at first teaming up in a losing effort, after which they fought in the dressing room. Then they had a match which went to a double dq, with both wrestlers' purses being held up to set up the Texas rules match. This week, they faced off in a grudge match in Wichita Falls, with the paper acknowledging their prior dressing room fight in Longview. I don't often cover the happenings on the lower portions of the cards, as they generally are straight-up matches between mid-carders and/or preliminary wrestlers, but on occasion they did run some angles with them.

Karl Von Stroheim is back wrestling on a regular basis this week, likely due to Donovan's injury, and was returned to the SPOT charts. Also returning here were Jerry London and The Mummy, both of whom had been working the lower Louisiana circuit. Women wrestlers Barbara Owens, Betty Bouche, Donna Christantello & Toni Rose finished up their two-week run here this week. 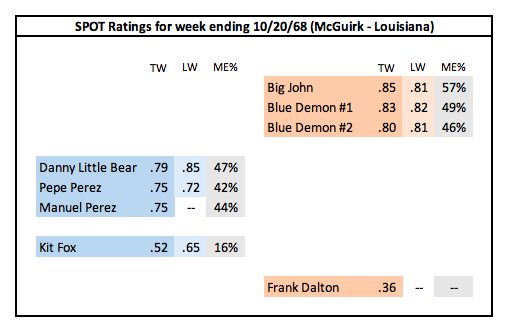 Notes/Analysis: The circuit added Greenville, MS to the weekly loop this week, running it on Mondays. I am still going to refer to it as the "Louisiana circuit" for two reasons. Number one, it's just easier that way. Number two, Greenville only lasts two weeks. A few weeks after that, it becomes a regular town on the main McGuirk circuit. The first show in Greenville featured The Blue Demons vs Pepe Perez & "Don Perez", who was likely Manuel Perez.

The Demons also faced the Perez brothers in Alexandria, Loranger and Lafayette. In Baton Rouge they took on Danny Little Bear & Kit Fox. With Manuel coming in to team with Pepe, we can clearly see that the two of them are moving into the spots previously occupied by Little Bear & Fox as top babyfaces. Both Little Bear and Fox see their SPOT ratings decrease again this week, while Pepe's increases and Manuel debuts with a .75 rating.

With Little Bear & Fox being transitioned to matches lower on the card while Pepe & Manuel are being moved up, it has an interesting effect on the SPOT ratings. No babyfaces have a rating above .80 this week, which is my unofficial cutoff to designate main-eventers. And since heels Big John and The Blue Demons are alternating in main events at different times in different towns, all three of them have a rating above .80 while no heels are in the upper mid-card level between .60 and .80

Following up on the "who the heck are the Blue Demons" story I've been trying to crack, Tamayo Soto is still being booked for Gulas shows this week, as are the other version of The Blue Demons. So there's no new information this week in addition to what we already (don't) know.

Another feud in this area was Big John taking on an opponent even bigger than he, the returning 600-pound Sonny the Wrestling Bear.  According to the ad in Baton Rouge, Sonny drew the largest crowd in Baton Rouge history his last time here in August. They squared off this week in Baton Rouge, Alexandria, Loranger and Lafayette. On all of those shows, John pulled double duty, working an earlier match before facing the bear. Sonny took on his trainer Nick Adams in Greenville.

Frank Dalton returned to the area this week. While Jack Dalton (Don Fargo) and Kenny Mack left the area due to their legal issues, Frank stayed put. He was kept off the shows for a while, likely to let the word of mouth regarding Jack & Kenny's arrest die down, but returned this week.