- October 01, 2019
Our coverage of Tri-State in 1979 continues with a look at the week ending October 7th: a couple of names from the past return here, the odd couple of Shikina & Sugar Bear continue to rule the roost & more! 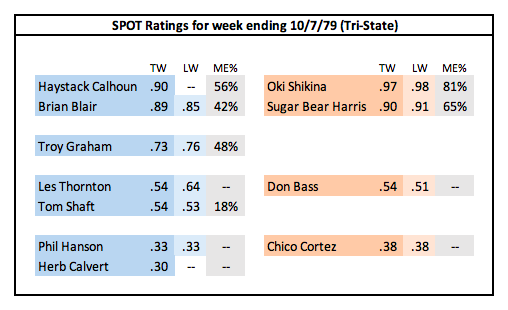 Notes/Analysis: Oki Shikina & Sugar Bear Harris continued to be pushed as the top tag team, facing Troy Graham & Tom Shaft in the main event in Tulsa and Graham & Brian Blair in the Fort Smith main event. In Tulsa, the two teams went to a double disqualification. Interestingly enough, this would not lead to a rematch the following week.

Also in Tulsa, Blair took on the returning Scandor Akbar. Akbar was full-time in Amarillo, but came in to work the Monday shows for a few weeks and then came in as a regular. Akbar had been a main eventer for McGuirk for many years and also had been a top manager in the territory. Since he is only working the Tulsa shows here and is still full-time elsewhere, I haven't listed him in the SPOT ratings just yet. Same goes for Kevin Von Erich and Ted Heath, both of whom worked Tulsa this week.

Haystack Calhoun came in for a few weeks. Calhoun, 45 years old at the time, was still fairly active all things considered. His last known whereabouts before coming here was a tour of Japan for the IWE in July and a five-week run in the WWWF before that. Haystack had worked for McGuirk on numerous occasions in the past dating back to the mid-60s. The other newcomer this week was Herb Calvert, who came in from Southeastern. Calvert had a short career, wrestling in a few different southern territories between 1978 and 1982.

Leroy McGuirk booked two women wrestlers for Tulsa this week, Kat LaRue and Jenny Sims. Kat was NOT the Kat LaRoux that worked from the mid-80s through the early 90s. That LaRoux was trained by Killer Kowalski and debuted as a teenager in 1986. This LaRue's name shows up occasionally working for the Culkins in Mississippi in 1977 and 1978. One of her opponents there was a Betty Sims, who could have been the same person as Jenny Sims, for whom I have no other information. The newspaper ad for this match lists it as a "Black Girls Match", which is pretty shocking for 1979. In the 1960s, when African-American wrestlers first started working for many of the southern territories, they were often billed as "Negro" wrestlers, but that terminology was a thing of the past by the late 70s.