- October 07, 2019
Our coverage of Mid-South in 1979 continues with a look at the week ending October 14th: more information on Dizzy Golden and Mark Totten, a look into the logistics of running three shows in one day, tag teams and six-mans top most of the cards & more! 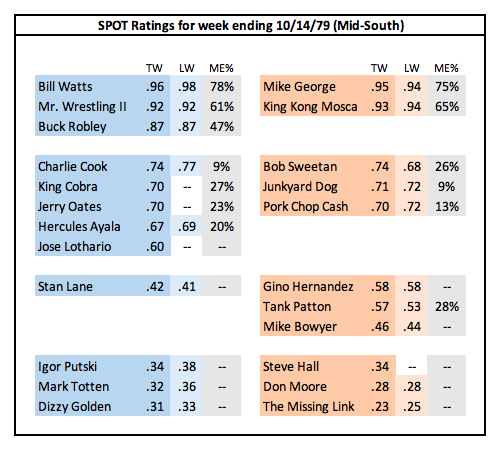 Notes/Analysis: With three different shows on Sunday, we can take a close look into how the cards were put together. The afternoon show in Baton Rouge started at 2:30 and had 18 wrestlers booked. Both Lake Charles and Monroe started at 7:00, with Lake Charles having 14 wrestlers booked and Monroe having 12. Everyone that worked Baton Rouge also worked one of the evening shows, with 7 of them going to Monroe and 11 to Lake Charles. Monroe is a little over 180 miles north of Baton Rouge and Lake Charles is 126 miles west. The opening matches in the evening towns had guys that were not booked in Baton Rouge. Those bouts probably went as long as needed to give the wrestlers time to make the evening town. Driving from Baton Rouge to both towns is very feasible given the start times of the shows, and you can figure 3 to 4 different carloads for each given that babyfaces and heels wouldn't ride together, and they might have had separate cars for wrestlers that went on early in Baton Rouge and those that went on later in the card.

This schedule is also indicative of the changes that Watts made to the house show loop. He changed the frequency of many towns, moving some to once every few weeks instead of every week. A few towns remained weekly, just not all of them. He was usually running one show per night during the week and split crews on the weekends with double shots on Sundays.

Tag team and six-man bouts dominated the top of the cards this week. In Baton Rouge on Tuesday, Bill Watts teamed with Buck Robley & Hercules Ayala against King Kong Mosca, Bob Sweetan & Tank Patton. In Shreveport, Dick Murdoch, Mr Wrestling II & Robley were advertised to face the same heel trio, but Watts subbed for II in the bout (which was won by the babyfaces). Robley & II took on Mosca & Sweetan on the Sunday Baton Rouge card while Robley teamed with Murdoch later that evening in Monroe against Mosca & Patton.

Other main events and matches of note include Robley facing Mosca in Lafayette, Mike George defending the North American title against Mr Wrestling II in Loranger and against Jerry Oates in Baton Rouge on Sunday. George also faced II in Lake Charles in what was likely a title match but the newspaper ad doesn't specify. Wahoo McDaniel and Killer Karl Kox came in for a day, working against one another on Sunday afternoon in Baton Rouge and later that night in Lake Charles. Kox came in from Georgia while Wahoo was bouncing around between Georgia, Southwest and here.

Two feuds of note that took place in the middle portion of the cards were Junkyard Dog vs Charlie Cook and Gino Hernandez vs Jose Lothario. JYD and Cook faced off in Baton Rouge on Tuesday, Loranger on Saturday and Monroe on Sunday. Gino and Lothario wrestled one another in Shreveport (going to a double countout) and Lafayette. They were on opposite sides of a tag team match in Lake Charles, Lothario teaming with Hercules Ayala and Gino teaming with Gran Markus. Markus was working Amarillo but came in for the one shot here.

While Dick Murdoch, Wahoo McDaniel, Killer Karl Kox and Gran Markus all made appearances here during the week, none of them were considered full-timers, so they are not included in the SPOT ratings. Newcomers to the ratings this week were Jerry Oates, King Cobra, Jose Lothario (who returned after not being booked here at all last week) and Steve Hall. I believe Oates was returning from an injury. In the case of Cobra, he had been booked occasionally in the Mississippi towns as a holdover from the Culkins' ICW promotion, but started as a regular in most of the towns at the end of this week. Steve Hall is believed to have been Tom "Rocky" Stone, notable AWA (and later WWF) prelim wrestler.

Catching up on the newcomers from last week where we didn't have much info, I got confirmation from Brian Last (one of the great wrestling podcasters) that Dizzy Golden was indeed Ed Leslie as I suspected. Leslie recently appeared on the Super Studcast podcast and talked about this period of time. I also dug up some information on preliminary wrestler Mark Totten. Totten played football and wrestled in high school in Cleveland, Ohio. He went to the University of Florida where he played on the offensive line for the Gators. Totten was drafted by the Green Bay Packers in the 10th round of the 1978 NFL draft. He was waived by the Packers in July of that year. He was then signed by the Patriots as a free agent, but they waived him in April 1979. An article from the newspaper The Transcript in North Adams, MA in July 1979 states that he flunked his team physical for the Patriots and left camp. His name first shows up as a pro wrestler in mid-September in Florida, spending just a couple of weeks there before coming here.

Iron Mike Sharpe is off the cards this week. He is injured, either in storyline or legitimately (or perhaps both). He's out for several weeks.