- October 07, 2019
Our coverage of 1982 continues with a look at the week ending October 10th: DiBiase scores the highest possible SPOT rating, Duggan becomes a main-eventer, Akbar throws everything but the kitchen sink at Buck Robley & more! 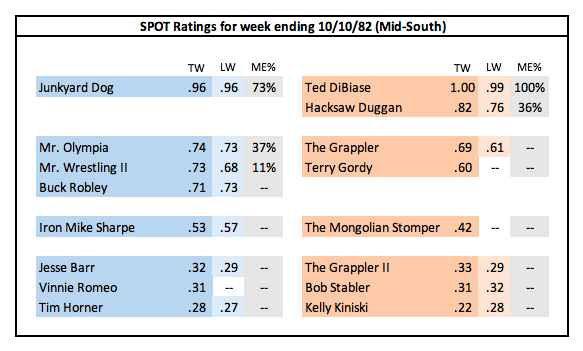 Notes/Analysis: Ted DiBiase's SPOT rating this week is a 1.00, which is the highest score possible. As a quick reminder, SPOT ratings for a given week are based on a rolling five-week period. What this means is that for all the shows I have data for over the five-week period from September 20th through October 24th, every time DiBiase was booked on a card here he was in the main event. Overall I estimate that my data includes 65-70% of all the shows Watts ran at this time; the most notable omission is New Orleans, where records are spotty at best.

Hacksaw Duggan's SPOT rating moves above the .80 threshold for the first time, largely due to him teaming with DiBiase regularly. I generally consider a .80 rating and above to be a "main eventer". This was Duggan's fourteenth week in the territory, so you can get an idea how slowly he moved up the cards over a three month period of time.

Duggan & DiBiase teamed up for three main events this week, facing Junkyard Dog & Mr Olympia in Baton Rouge, Vicksburg and Loranger. In Baton Rouge and Loranger, these matches were title bouts (JYD & Olympia were the champs) with a no-diqualification stipulation. While the Vicksburg match likely had the same stipulations, I don't have the original ad or program for that show so can't say for sure. In Shreveport, DiBiase defended the North American title against Mr. Wrestling II in a match which went to a one-hour time limit draw. In Alexandria, he defended the title against Tony Atlas. Atlas was wrestling part-time for Southwest, mostly just working the Houston shows for Paul Boesch. He would come here as a regular in a couple of weeks, but for now this was a one-off appearance.

Coming in for the week were The Iron Sheik and Terry Gordy. In the case of Gordy, since he made a few appearances a couple of weeks earlier and comes back again in a couple of weeks, I listed him in the SPOT ratings. Iron Sheik was here for this week only, so I did not include him (though if I had, his SPOT rating would have been a .72). Both Gordy and Sheik were working in Georgia. Gordy was actually finishing up there and biding his time bouncing around a few places before The Freebirds began their big World Class run. Gordy & Sheik were brought in by Scandor Akbar as part of Akbar's feud with Buck Robley. Gordy faced Robley in a bounty match in Baton Rouge while Sheik tried to collect the bounty in Loranger. In Vicksburg and Shreveport, Sheik faced Robley in what were billed as Iranian death matches. Robley won the Shreveport match and worked double duty there, also beating Akbar in a steel cage bout.

Akbar has a couple of new faces to help him in his feud with Robley because the old faces left. As I mentioned last week, Robley & Iron Mike Sharpe faced One Man Gang & Killer Khan in a loser leaves town match in Baton Rouge on Sept 28th. It's safe to say Robley & Sharpe won that bout as both Gang & Khan left the territory by the end of the week. Khan goes to Southwest while Gang goes to Memphis. Also not in the territory this week was Dick Murdoch, who went to Florida for a brief stay. He's back here next week.

Vinnie Romeo returned to a full-time house show schedule and thus is back in the SPOT ratings. The other newcomer was The Mongolian Stomper. Stomper came in from Southwest. He doesn't stay long, but he stays long enough to be in the ratings (my general rule of thumb is they need to work at least a couple of shows per week for at least a couple of weeks).