- October 30, 2019
Our coverage of Mid-South in 1979 continues with a look at the week ending November 4th: former football players do battle and have their backgrounds slightly embellished, Robley & Wrestling II battle George & Sweetan on multiple fronts, Ivan Koloff visits for a short run & more! 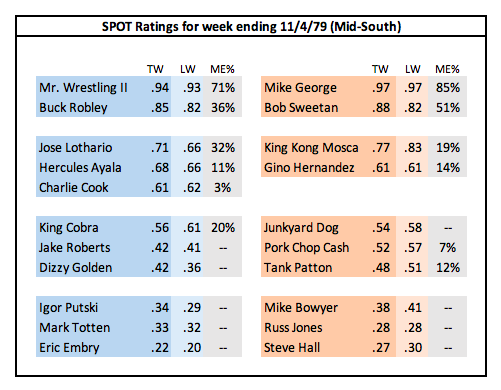 Notes/Analysis: The angle where Mike George was forced to wrestle twice on house shows to defend two separate titles played out this week in Baton Rouge on the Sunday afternoon show. George teamed with Bob Sweetan to defend the Mid-South Tag Team titles against Buck Robley & Hercules Ayala, then had to come back to defend his North American Heavyweight title in a no-disqualification bout against Mr Wrestling II. This was the second show in Baton Rouge this calendar week; on Tuesday night, George & Sweetan defended the tag belts against Wrestling II & Robley. The semi main event on that show was Charlie Cook vs King Kong (Angelo) Mosca in what was billed as a battle of "All-American footballers". Mosca played football at Notre Dame; I did a quick internet search and could not confirm that Mosca was ever an All-American, but that doesn't necessarily mean he wasn't. Cook was listed in the ad for the show as having played at Grambling (State). In Alexandria, Mosca was pitted against Wahoo McDaniel, with the match billed as a "battle between two All-American and All-Pro football stars." The only one of those credentials I am able to confirm was Mosca being a two-time All-Star with the Hamilton Tiger-Cats of the CFL.

Alexandria also saw the advertised return (from injury) of Iron Mike Sharpe. He was billed to face Pork Chop Cash; results from the show are unavailable. However, Sharpe doesn't have any other bookings here until November 18th, so I don't know for sure if he worked the show or not. The top two matches in Alexandria were Mike George defending the N.A. title against Wrestling II in a no-dq match and Robley vs Sweetan. Those same four wrestlers were in the top two matches the night before in Shreveport, but the pairings were switched up as Wrestling II took on Sweetan and Robley fought George.

In addition to the one-off bookings for Sharpe and Wahoo, Ivan Koloff worked the Sunday show in Baton Rouge; this was the beginning of a 14-day run for him here. Ivan was taking about a month off from Georgia; he and Ole Anderson had lost the Georgia Tag Team title to Tommy Rich & The Crusher in late September, which set up a face turn by Ole. Ivan would return to Georgia in November to feud with Ole. This would build to one of the most famous angles in Georgia's history, Ole & Gene Anderson turning on Dusty Rhodes the following July while locked inside a cage with The Assassins & Ivan. I don't list Ivan in the SPOT ratings since he was here so briefly, but he's generally booked in the upper mid-cards.

Bill Watts and Jerry Oates are not booked on any house shows this week and are not listed in the SPOT ratings; both will return next week. Don Moore left the territory. He may have worked a handful of TV tapings in Florida and Georgia for the remainder of the year.

As discussed elsewhere in this blog with my coverage of 1982, Bill Watts made some big changes to the house show schedule and structure after taking over the reins. In particular, he ran many towns with a "full crew" instead of running multiple shows every night with split crews. He did still have split crews in some of the smaller towns. On Thursday this week he ran Greenville and Lafayette. The Greenville show was headlined by George & Sweetan v Wrestling II & Robley in what may have been a title bout (the ad in the newspaper doesn't specify one way or the other) and a grudge match between King Cobra and Pork Chop Cash. In Lafayette, a "$3,000" battle royal was advertised as the main event, with a Texas death match between Jose Lothario and Gino Hernandez second from the top.