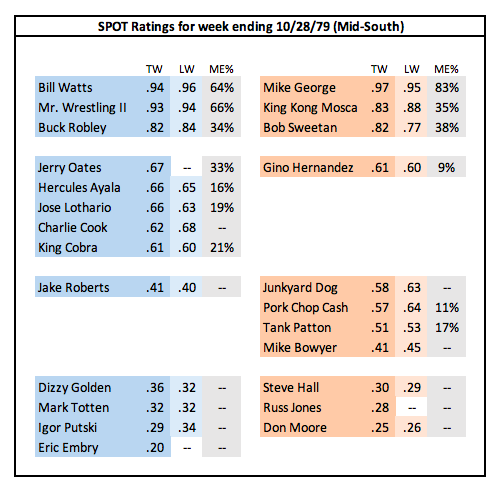 Notes/Analysis: In Shreveport this week, Mike George found out that holding multiple titles wasn't all it's cracked up to be. He & Bob Sweetan were scheduled to defend the Mid-South Tag Team titles against Bill Watts & Buck Robley on the card, and then in the main event George would have to come back to defend his North American title against Dick Murdoch. A similar scenario would play out in several other towns over the next few weeks with George having to wrestle twice. While I don't know for a fact that this angle is derived from the TV, the fact that it happens in numerous towns over a four week period is a strong hint that that's the case. This also seems to indicate that the TV that aired in Shreveport was ahead of the other towns. We know that's the case in later years, but this seems to have been the case even back in 1979.

George also defended the North American title in Baton Rouge and Jackson against Mr Wrestling II. George also faced II in Lafayette, but the newspaper ad doesn't specify if the title was on the line. George & Sweetan had tag team title defenses in Loranger against Jerry Oates & Hercules Ayala and in Monroe against Watts & Robley. The stipulation for the Monroe bout was that immediately afterwards, no matter the outcome, Robley would get Sweetan in the ring for 5 minutes with no referee. Mike George was also billed as the Mississippi State champion, and in Greenwood this week King Cobra took on Pork Chop Cash with the winner to get a future shot at that title. Based on the lineup for the next Greenwood card, it would appear Cobra won this bout.

As mentioned above, Dick Murdoch worked the Shreveport card this week; it looks like he came in from Amarillo just for the one shot. Likewise, Ernie Ladd came in from Georgia to work the Baton Rouge show in a six-man tag, teaming with Junkyard Dog & Pork Chop Cash.

Bill Watts took on King Kong Mosca in Baton Rouge in a match for the Brass Knuckles trophy. In our coverage of 1975, they ran a storyline where the Brass Knux trophy was being retired. So in wrestling terminology, "retired" seemingly means "gone for a few years". The next night in Jackson, Watts took on Mosca in a Bunkhouse rules match.

Jerry Oates was back on the house shows this week and returns to the SPOT charts. Midget wrestlers Butch Cassidy and Ivan the Terrible finished up their two-week run here this week.

The two newcomers in the territory were Eric Embry & Russ Jones. Russ Jones was Bobby Fulton. At some point over the last several years, Bobby actually took to social media to ask if anyone knew what name he used during this run, as he had forgotten. The two had been teaming for Gulas prior to coming here; there they were billed as "brothers" Bob & Don Fulton. Bobby had just turned 18 years old earlier in the month, while Embry was 20.