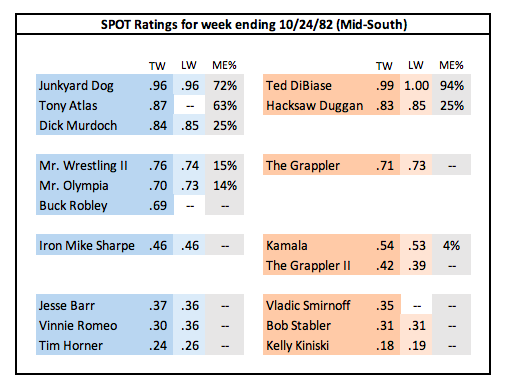 I have data for the following house shows this week:
Tuesday - Baton Rouge, LA
Wednesday - Lafayette, LA
Friday - Shreveport, LA
Saturday - Alexandria, LA
Sunday - Lake Charles, LA
(A few sources list a show in Little Rock this week, but some sources have it on Thursday and some on Sunday. For it to have been on Sunday it would have to have been an afternoon show and 12 of the wrestlers on the card would have had to fly to Lake Charles immediately afterwards, so Thursday seems more likely)

Notes/Analysis: While I focus on the full-timers when I put together the weekly SPOT ratings, I do try and note when outside talent comes in for a few shows. This week, three such part-timers appear on the cards. In Baton Rouge, Junkyard Dog & Mr Olympia defended the Mid-South Tag Team titles against two wrestlers from Georgia, Matt Borne & Super Destroyer (Scott Irwin). Super D was in for the entire week, also wrestling Olympia in a singles bout the next night in Lafayette, Dick Murdoch in Alexandria and then Tony Atlas in Lake Charles. Borne seems to be in just for two shows, Baton Rouge and Lafayette. Borne would come back the following week to work the TV tapings in Shreveport and immediately be thrust into a major angle, but won't be here full-time until the second week in November.

The other "guest star" was Jerry Lawler. The Shreveport newspaper, while not having a full ad for the Friday night show, did list two main matches. In one, JYD faced DiBiase in a taped fist match. The other was a bounty match between Buck Robley and Lawler. Results are not available, so I can't confirm that Lawler worked the show. However, he did work the TV tapings in Atlanta for Georgia Championship Wrestling the next day, so it's feasible that he took the weekend off from Memphis to work Shreveport and Atlanta.

The Mongolian Stomper abruptly left the territory. Over the last week I've put together a little bit of a timeline regarding his stay here. He was advertised for all of the house shows last week, but the only results I have were from Baton Rouge. He definitely worked that show. The very next night was a TV taping in Shreveport, and Stomper did not appear on that taping at all. While nobody knows for sure, the evidence points to Stomper either leaving or being let go sometime between Tuesday night and Wednesday. At the first set of TV tapings he worked (two weeks prior), he did an angle with Buck Robley where he attacked him and hung him over the ropes (this also may have explained why Robley was off the house shows last week). Brian Ockman, who has an extensive collections of house show results and notes from TV tapings, said that the only follow-up to that angle was Robley coming out for an interview where he said he handled his business with Stomper outside of the arena.

Newcomers this week were Tony Atlas and Vladic Smirnoff. Atlas worked one house show here a couple of weeks ago, but this week he started full-time. He had spent the previous two months working solely in Houston for Paul Boesch. While he had made a handful of appearances here dating back to April 1979, this was his first stint as a regular here. Smirnoff is believed to be David Strawn aka Kortsia Korchenko. This was the first and only time he seems to have used the name Vladic Smirnoff. He had previously wrestled as Mike Diamond and Skull Muphy Jr. He would only last here a few weeks.