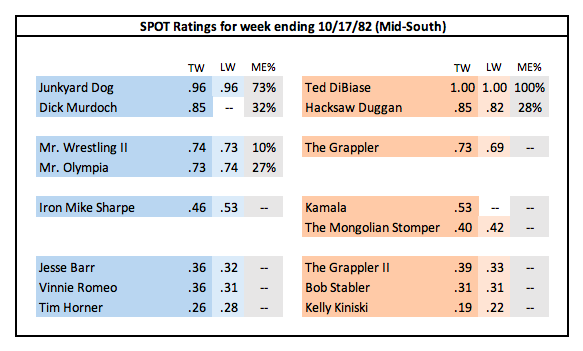 Notes/Analysis: Kamala started as a full-timer this week. He had been in a couple of weeks earlier to work the 9/29 TV taping and a house show the night before. He then finished up his run in Memphis before coming here as a regular. With both One Man Gang and Killer Khan having left the territory recently, there was a huge hole to fill in the "monster heel" category, and Kamala most certainly filled it. He is in line for a huge push, but starts out in the mid-card and lower mid-card being built up with victories over preliminary wrestlers.

Ted DiBiase continues to dominate the main event scene. He faced Junkyard Dog four times this week. They were booked in a Dog Collar match in Baton Rouge, a North American title match in Biloxi, a Taped Fist match in Greenwood, and finally in Port Barre. The newspaper ad for that card doesn't specify any stipulations or whether or not it was a title bout. In Monroe, DiBiase defended the N.A. title against Dick Murdoch in a no-DQ match. The other major stipulation match advertised this week was Murdoch facing Hacksaw Duggan in a Texas Death match in Baton Rouge.

The Grappler continued his feud with Mr Wrestling II this week with the two facing off in singles bouts in Biloxi, Greenwood, Port Barre and Monroe. In Baton Rouge, II teamed up with Mr Olympia to face Grappler & Grappler II, which seems to be the next step of the feud. The singles bout between II and Grappler happened in Baton Rouge two weeks earlier, so that town seems to be ahead of some of the others by a week or two.

Dick Murdoch returned to the territory this week after a week away. He's here full-time for the next few weeks. Buck Robley wasn't booked on any of the house shows I have this week (but did work the TV taping) and only is booked on one for each of the following two weeks, so I have removed him from the SPOT ratings chart. Likewise, Terry Gordy was removed as he's not booked here for the next couple of weeks.

Ted Allen came in this week to work the TV tapings as well as the Baton Rouge house show the night before. He had spent the first several years of his career in the southeast, working as a preliminary wrestler or making TV appearances for numerous promotions. This was his first time working for Watts, and he didn't come alone. He brought along a rookie that he trained who had maybe a dozen or so matches under his belt. That rookie was named Marty Lunde, aka the future Arn Anderson. In Baton Rouge, Allen wrestled The Mongolian Stomper while Lunde wrestled Kamala. In Shreveport for TV, the two teamed up and wrestled twice, first against Tim Horner & Buck Robley and then against Ted DiBiase & Hacksaw Duggan. The pair would come back in two weeks for another TV taping, then two weeks after that they would come in as regulars.