- September 12, 2019
Our coverage of 1968 continues with a look at the week ending September 15th: two different teams continue to claim the US tag titles, using some "detective work" to try and identify three newcomers this week & more! 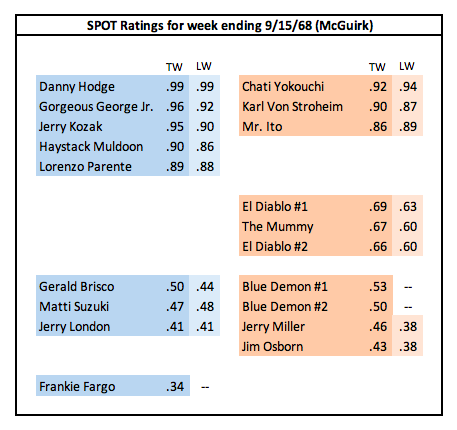 Notes/Analysis: After facing Gorgeous George Jr. & Jerry Kozak in Shreveport, Jack Donovan & Ronnie Reed (and their manager Mrs. Jack Donovan) spent the rest of the week in the lower Louisiana portion of the territory. As such, I have removed them from the ratings chart. The same applies to Bob Griffin and Mark Starr, both of whom also worked Shreveport but then headed south.

George & Kozak defended the U.S. Tag Team titles in Springfield against Chati Yokouchi & Mr. Ito ... kind of. Recall that in many of the towns, both George & Kozak and Donovan & Reed laid claim to the titles based on a TV match where George & Kozak beat the champs in an impromptu bout. Rematches were held around the horn, and in some cities one team would win the belts cleanly while in others they would have non-finishes to build to rematches. In Springfield, the titleholders were still disputed, so George & Kozak were actually putting up their "claim" to the belts for this match.

Much of the rest of the circuit was headlined by Yokouchi & Ito teaming up with Karl Von Stroheim to face a babyface team, with the most frequent opponents being Danny Hodge, Haystack Muldoon & Lorenzo Parente. In Joplin, Gerald Brisco teamed with Muldoon & Parente to face the heels.

In Monroe, the show was held at the Roll Arena instead of regular venue the Civic Center. Roll Arena had been the regular venue for several years until they moved to the bigger arena. With the Civic Center unavailable this week (per a newspaper article), promoter Bob Witt moved the show to the former venue. The card was headlined by a tag team battle royal, including George & Kozak. The article mentioned that George & Kozak won the titles "last week" on the local TV show, so that gives you an idea how far behind the TV was in Monroe compared to the rest of the loop.

Also participating in that battle royal were newcomers The Blue Demons. Wrestlingdata.com lists them as Frank Martinez & Joe (Rocky) Tamayo. Martinez had been teaming with Al Greene in Florida as The Blue Demons in August, and Tamayo had been working for Gulas as late as July. While wrestlingdata is generally very accurate, I think we need an asterisk here. The Demons stay here for a while (including working in the lower Louisiana end of the territory) and Martinez, Tamayo and Greene all seem to pop up elsewhere during that time. None of them have any known bookings in other areas in September, so as of right now it could have been a combination of any of the three. As I move forward week-to-week, I'll do my best to keep tabs on their whereabouts and hopefully use the process of elimination to figure out exactly who these Demons were.

The only other newcomer was Frankie Fargo, who comes in for a few weeks. I have no idea who this was, but there's an outside chance it was Don Fargo. I am basing this solely on a hunch. Recall that Don had been wrestling in Louisiana as Jack Dalton, but had some trouble with the law. He ends up leaving the territory in early September, and his next known whereabouts are for Dick the Bruiser in October. So there's a month where he's not working anywhere. Perhaps he worked some shows here on the down-low and used an amalgam of the name "Don Fargo" and "Frank Dalton", Frank having been the name of his partner in Louisiana. Again, I have absolutely no evidence to prove this (and Fargo makes no mention of it in his book), but looking at the timeline of his known whereabouts and the fact that there are no other records of a "Frankie Fargo" wrestling besides this brief run, it is at least possible.

Besides Donovan, Reed, Griffin & Starr, all of whom went down to Louisiana, Nick Adams and Sonny the Wrestling Bear also left the area. Sonny pops up in Gulf Coast later in the month. 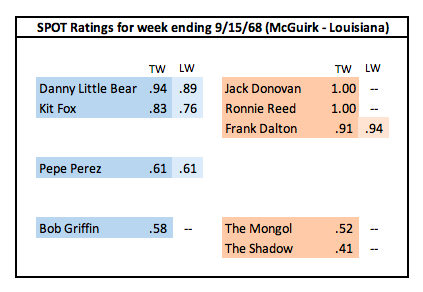 Notes/Analysis: As mentioned above, several wrestlers from the main McGuirk circuit made their way down here. Jack Donovan & Ronnie Reed are billed as U.S. Tag Team champs and defend against Danny Little Bear & Kit Fox in Baton Rouge, Alexandria, Chalmette and Lafayette. Little Bear was actually advertised to work twice in Lafayette, also defending his Louisiana state title against Pepe Perez in a rematch from last week.

Besides Donovan & Reed (and their manager Mrs. Jack Donovan), also coming in were Bob Griffin and Mark Starr. Starr worked as The Mongol, which is the gimmick he used when he was here previously. Leaving this area were Haystack Muldoon and Los Diablos; the three of them had been sent down here briefly from the main circuit and returned north this week.

A masked wrestler named The Shadow was booked on three shows this week. I don't know who he was, but he had worked sporadically here in the past. This was the first time he was booked on more than one show in a week's time, likely due to all the movement back-and-forth of wrestlers between the two circuits.

Besides the title matches listed above, Danny Little Bear defended the Louisiana title against Pepe Perez in Loranger. That card also saw midget wrestlers Billy the Kid and Jay Cox on opposite sides of a tag team match, teaming with Kit Fox and Frank Dalton respectively.