- September 24, 2019
Our coverage of Tri-State in 1979 continues with a look at the week ending September 30th: our first look at SPOT ratings, a who's who of the roster for the new(ish) territory, how Brian Blair may have paid for his honeymoon & more! 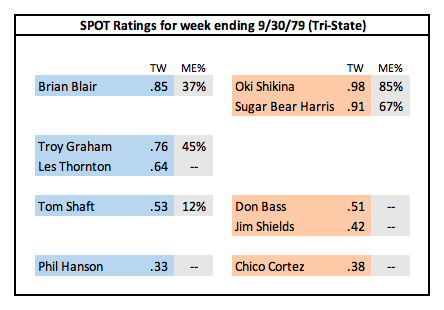 Notes/Analysis: Leroy McGuirk added a second town to his circuit. Fort Smith, AR had been a weekly stop (usually on Wednesdays) dating back many years, but at this point in time hadn't been run for about three years. He ran it Tuesday this week, but would only run the town a total of four times in 1979. The lone constant for the first several months of McGuirk's new territory would be Tulsa on Monday nights. He would start & stop running in several former towns, or run them every few weeks instead of weekly, but wouldn't get a full-time weekly loop set until February 1980. As such, his talent roster would be quite thin until that time, as you can see by the SPOT ratings chart above.

David & Kevin Von Erich came in from East Texas to work Tulsa this week, taking on Sugar Bear Harris & Oki Shikina for the US Tag Team titles. Sugar Bear & Shikina presumably retained the belts. The other feature match in Tulsa was billed as part of a tournament to crown a new Junior Heavyweight champion, with Les Thornton taking on Jim Shields. Like the Von Erichs, Thornton came in from East Texas. He is included in the SPOT chart because he worked a few shows between this week and next week. These tournament matches, billed as "elimination matches", occurred sporadically in Tulsa up through the end of November.

Jim Shields had wrestled for McGuirk previously, a six-month stint starting in September 1978. After that, he went to Florida for about six months, then came back here. After finishing up here, that seems to be it for his wrestling career. Looking at the other unfamiliar names on the roster, I don't have any info on Phil Hanson. There's a Chico Cortez that wrestled primarily for Gulas for many years, but his name doesn't show up anywhere else after 1973, so it likely is a different guy.

The slightly more familiar names on the crew include Tom Shaft, Don Bass and Troy Graham. Bass and Graham (aka Dream Machine) are primarily known for their runs in Memphis in the 70s and 80s. Shaft, nicknamed "Boogaloo", had worked for the Culkins in Mississippi and bounced around other southern territories during a decade-long career.

The top heels were Sugar Bear Harris & Oki Shikina. Sugar Bear is Jim Harris aka the future Kamala. Like Tom Shaft, he had worked for the Culkins promotion until they closed up. Shikina (aka Pedro Zapata) was nearing the end of a twenty-plus year career. The top babyface was Brian Blair, who was married to McGuirk's daughter Mike (nee Michael Kathleen McGuirk). When Blair worked Hawaii earlier in 1979, I believe he was on his honeymoon. Just like Florida, the Hawaii territory was often used by wrestlers to make some money while taking a brief vacation.

Looking at the first card in Fort Smith, the main event was Blair vs Shikina with Graham vs Sugar Bear second from the top. Silvano Sousa was advertised in Fort Smith as well. Sousa, who primarily wrestled in the WWWF during his brief career, had been working in Amarillo at the time.