- September 26, 2019
Our coverage of 1968 continues with a look at the week ending September 29th: six-person mixed tags, Hodge puts his title on the line, Los Diablos put their masks on the line, Akbar returns, listing the local promoters in Louisiana (including the wife of a wrestling legend) & more! 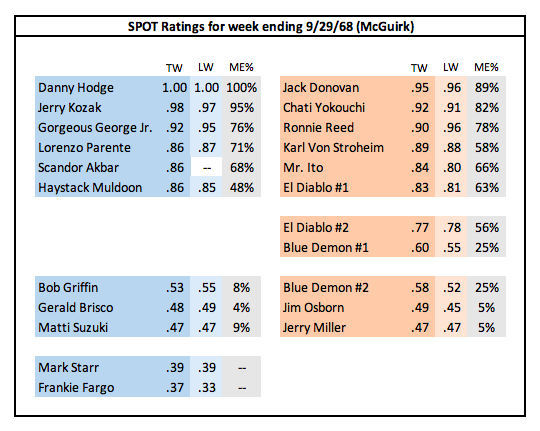 Gladewater was run instead of Longview this week. The two towns were 12 miles apart, and the show was promoted in the Longview newspaper. The main event was Hodge defending the NWA World's Junior Heavyweight title against Jack Donovan, which was the only known title match in the territory this week. The biggest stipulation match of the week was Los Diablos putting their masks on the line against George Jr & Parente in Wichita Falls. I don't have results, but the two teams are rematched the following week with different stipulations, so we can assume the Diablos didn't lose cleanly here and didn't unmask.

Continuing our Blue Demon watch, there are no known bookings outside the area for Frank Martinez, Al Greene or Joe Tamayo this week. So I still won't rule any of the three out when trying to figure out who the Demons were here. Next week, however, we might be able to eliminate one of the three.

Whoever they were, the Blue Demons were in the main event in Fayetteville on Sunday afternoon, facing Gorgeous George Jr and the returning Scandor Akbar. Akbar had left here in June to start a three month run in Florida, where he wrestled as a heel using his real name (Jim Wehba). He had been a babyface here when he left, and returned in the same role.

Jerry London was moved from this area to the lower Louisiana circuit. Chati Yokouchi & Mr. Ito also worked the Louisiana towns this week, starting a two-week run there. I've kept them in the SPOT ratings here because they still work in this part of the territory at least once each week.

Notes/Analysis: Loranger was headlined by an eight-man tag with two special referees, promoter Skeet Hewitt and Bill Golden. Hewitt was listed as the local promoter for Loranger, and this is a good opportunity to share what I have learned on who the promoters were in some of the other towns. The promoter in Baton Rouge was Mrs Jimmy Kilshaw and the promoter in Alexandria was Midge Bell. Bell was at one point married to legendary wrestler and color-barrier-breaker Sputnik Monroe. My research shows that they were married for about 10 years, but I'm unsure of the exact dates. They had two children together, one born in 1958 and one in 1960. So it's possible they were still married at this time.

As mentioned above, Chati Yokouchi & Mr. Ito were in for two weeks along with manager Karl Von Stroheim. In Baton Rouge, they lost to Danny Little Bear & it Fox by disqualification when Von Stroheim interfered. Little Bear & Fox also defeated Yokouchi & Ito by dq in Chalmette. Alexandria was headlined by Danny Little Bear taking on Big John. The previous week, John had been one of the special referees for a match between Little Bear & Fox and Jack Donovan & Ronnie Reed. The local newspaper article promoting this week's card says that John disqualified Little Bear during that match, so that was how this week's main event was set up.