- September 05, 2019
Our coverage of 1968 continues with a look at the week ending September 8th: tracking the two main event tag team feuds, wrestling bear still in town, who took the place of Jack Dalton & Kenny Mack in Louisiana & more! 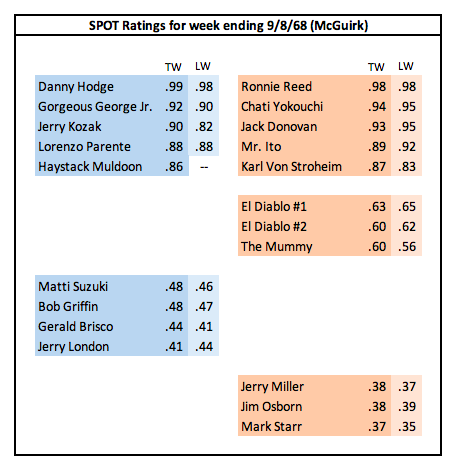 Notes/Analysis: With the SPOT ratings relatively stagnant, the biggest move in the ratings was from Jerry Kozak, who went from a .82 to a .90 this week. Kozak main evented Tulsa and Wichita Falls in singles bouts against Ronnie Reed. Those cards also featured Sonny the Wrestling Bear taking on both Jack Donovan and his wife/manager in handicap / intergender / interspecies matches. Kozak also teamed up with Gorgeous George Jr. to continue their feud with Donovan & Reed over the disputed US Tag Team titles, facing them in Monroe and Springfield. In Springfield, their bout had a ninety minute time limit since last week's match there went to a sixty minute time limit draw. George & Kozak won the rematch by disqualification, meaning the titles were still in a state of flux in Springfield.

The other major feud was between Chati Yokouchi & Mr. Ito with manager Karl Von Stroheim and babyfaces Danny Hodge & Lorenzo Parente. Krusher Karlsson was brought in for the week to be special referee for some of the bouts between the two teams. Karlsson had been in Amarillo working as The Sniper, and after the week here he headed to Japan to work for the JWA as Karl Karlsson. In addition to being a special referee, Karlsson also teamed with Matti Suzuki to face Los Diablos in Shreveport and Monroe and faced Bob Griffin in Longview.

In addition to the matches against the Donovans, Sonny the Wrestling Bear faced Karl Von Stroheim in Little Rock and Oklahoma City. His SPOT rating was a .79, and his trainer Nick Adams continued to work prelims with a SPOT of .36

Women wrestlers Evelyn Stevens and Jessica Rogers worked Shreveport. The following night Evelyn was booked against Barbara Galento in Monroe. Stevens and Rogers also worked the lower Louisiana circuit twice later in the week, so I'm not sure why Galento was booked in Monroe instead of Rogers.

Tulsa, which normally ran every Monday, had a special Sunday night card at the end of this week. The card was billed as "Family Night" with kids free, and the main event was Chati Yokouchi, Mr. Ito & Karl Von Stroheim beating Danny Hodge, Lorenzo Parente & Haystack Muldoon. This was Muldoon's return here from a two-week stint in the lower Louisiana circuit. 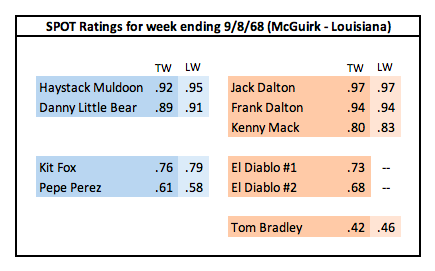 Notes/Analysis: While I mentioned last week that both Jack Dalton and Kenny Mack left town after being bailed out of jail and finishing up last week's bookings, they both appear on this week's SPOT ratings. Keep in mind that the ratings are based on what was booked/advertised, as opposed to what actually happened. So since they were booked for a couple of the towns this week (regardless of whether or not they appeared), they're on the chart.

New to the circuit were Los Diablos, who are in the unique position of appearing both here and in the main circuit this week. They were likely brought in to substitute in tag matches where the Daltons were advertised, though they were advertised in advance for Baton Rouge and Lafayette. Also, as mentioned above, Jessica Rogers and Evelyn Stevens were booked in Chalmette and Lafayette.

This circuit tended to have stipulation matches on a frequent basis. Since it was such a small crew and the same guys appeared in the same towns every week, they probably felt they needed gimmicks like stipulation matches in order to keep drawing. Loranger advertised Haystack Muldoon vs the Daltons in a handicap match with Kenny Mack handcuffed to Danny Little Bear. In Alexandria the Daltons were scheduled to face Muldoon & Pepe Perez in a match with the ring enclosed with (barbed) wire. I don't have results but assume both matches were changed with Jack Dalton and Mack likely being gone by this point. Los Diablos subbed for the Daltons in Chalmette, facing Muldoon & Danny Hodge (who came down from the main circuit just for the one show). Lafayette also had a rare face vs face match with Little Bear defending the Louisiana state title against Perez. They would face each other the following week as well.