- September 19, 2019
Our coverage of 1968 continues with a look at the week ending September 22nd: judo jacket matches, disputed tag team title matches, an East Texas title match, a newcomer in Louisiana is Big and may also be Bad & more! 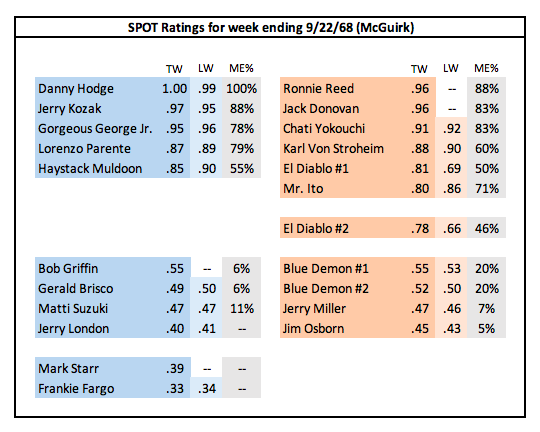 One of the matches making its' way around the territory this week was a judo jacket match with Chati Yokouchi facing one of the top babyfaces. The rules for this match were as follows: the first fall is competed under judo rules with both men wearing gi, the second fall is competed under traditional wrestling rules and if a third fall is needed the man who won their fall in the shortest amount of time gets to choose the rules. Yokouchi's opponent in Tulsa and Little Rock was Danny Hodge. In both cases, Hodge won the match by disqualification. Jerry Kozak was Yokouchi's opponent in Springfield; he, too, won the match by dq.

Jack Donovan & Ronnie Reed took on Kozak & Gorgeous George Jr. in Shreveport to try and settle the dispute over which team was the rightful US tag champs. After going to a 60 minute draw in Shreveport last week, this bout had a 90 minute time limit. Kozak & George won by dq, so the issue wasn't settled. In Monroe and Wichita Falls, Kozak & George faced Los Diablos. In these bouts, Kozak & George were treated similarly to the "interim" champions you see in the UFC, with their claim to the titles being on the line.

In Longview, the East Texas championship was on the line as champion Karl Von Stroheim defended against Lorenzo Parente. This title seems to have been a creation solely for the Longview shows and wasn't defended very often. While I don't have results for this show, title histories list Parente as having won the title here.

Women wrestlers Evelyn Stevens and Jessica Rogers faced one another in Joplin, with Stevens winning. Evelyn would stay through the following week to face Mrs. Jack Donovan in singles matches and mixed tags.

Last week I mentioned that I was going to track the whereabouts of Frank Martinez, Al Greene and Joe Tamayo in an effort to figure out which combination of the three were working here as The Blue Demons. All three don't have any known matches in other territories this week; so for now, it could still be any combo of the three.

As mentioned above, Jack Donovan & Ronnie Reed worked Shreveport, but they spent the rest of the week in the lower Louisiana circuit. Because they did work once here and come back full-time next week, I put them back in the SPOT ratings. Bob Griffin and Mark Starr also returned here this week from lower Louisiana. Replacing Griffin & Starr down south were Jerry London & The Mummy (Benny Ramirez). In the case of London, he too worked Shreveport this week thus is listed in the SPOT ratings above as well as the ones below for lower Louisiana.

Notes/Analysis: As mentioned above, Jack Donovan & Ronnie Reed (with manager Mrs. Jack Donovan), Jerry London & The Mummy worked here this week "on loan" from the main circuit. Another newcomer was Big John. I should note that for the first couple of weeks, he was billed as Big Bad John but it was then changed to Big John. This may very well have been William Goodman, who wrestled as Big Bad John in a number of territories in the 60s & 70s. There is a gap in Goodman's records on wrestlingdata.com for the last seven months of 1968 and most of 1969, so while I can't "positively ID" him, it definitely would fit into the timetable of his career.

The cards this week were generally headlined by Danny Little Bear & Kit Fox taking on Donovan & Reed. In Baton Rouge, their match was billed as title vs title (Little Bear & Fox were the Louisiana tag champs) and Donovan & Reed won by disqualification. In Alexandria, the match was "winner take all" with two referees, one of whom was Bill(y) Golden.