- September 18, 2019
Our coverage of 1975 continues with a look at the week ending September 21st: Robley ups the bounty on Dick Murdoch, Watts takes a back seat, Pork Chop gets a big opportunity, a glimpse into what the future holds for young Ted DiBiase & more! 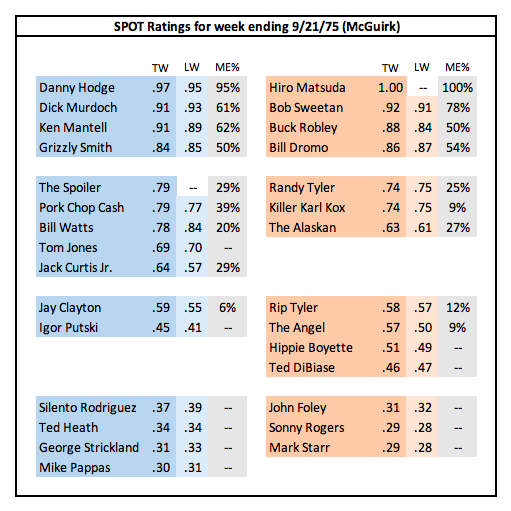 Dick Murdoch continued his feud with Buck Robley, with Buck increasing the bounty on Murdoch from $1,500 to $2,000. Toru Tanaka came in from Georgia to try and collect the bounty, facing Murdoch in Shreveport and Jackson. In New Orleans, Dick the Bruiser was booked against Murdoch in the bounty match. Tanaka faced Danny Hodge on that card. In Tulsa, Murdoch faced Bob Sweetan in a brass knuckles match.

The main event in Tulsa was Hiro Matsuda defending the NWA World's Junior Heavyweight title against Danny Hodge in a match with no time limit. Matsuda also defended against Hodge in Alexandria (where Hodge won by disqualification) and against Pork Chop Cash in Baton Rouge. In the newspaper article promoting the Baton Rouge bout, it mentioned that Pork Chop was undefeated in Baton Rouge up to that point. Matsuda defeated Pork Chop to win the match, keep the title, and end Pork Chop's local undefeated streak. Matsuda also faced Mantell in New Orleans in what was likely a title bout, but the newspaper article doesn't mention anything one way or the other.

While Murdoch had his hands full with Robley, Bill Watts found himself doing battle with Killer Karl Kox and The Angel (Frank Morrell), so he brought in some backup. Watts teamed with The Spoiler (Don Jardine) to face Kox & Angel this week in Shreveport, Jackson and New Orleans. Jardine had just finished up in Mid-Atlantic (where he worked as Super Destroyer) and came here for a couple of weeks before starting in Georgia. It should be noted that Watts moved down the cards shortly after Murdoch turned babyface; I have read that Murdoch was super over as a babyface and Watts recognized it enough to keep himself out of the spotlight and let Murdoch be "the guy" in the heavyweight division.

Other notable matches included Bill Dromo beating Grizzly Smith in a Texas death match in Alexandria. Grizzly also faced Bob Sweetan in a Texas rules match (same as Texas death) in North Little Rock. Sweetan took on Danny Hodge in a 3 out of 5 falls match in Fort Smith. Greenwood also had a 3 out of 5 falls match main event, which was also billed as "winner takes all" and falls count anywhere with Pork Chop Cash teaming with Jack Curtis Jr. to face The Alaskan & Buck Robley.

Ted DiBiase came here in April after starting his career in Amarillo. The 21-year old future superstar was slotted in the mid-card as a heel up to this point in time. This week, he was in that same role most of the week with the exception of Alexandria. There, he was booked against (and defeated) fellow heel Hippie Boyette. Neither of the two had been on the previous week's Alexandria card, so it wasn't a case where there was an angle at the house show to lead up to it. It might have just been a tryout to see how the fans would react to the match and if they'd back DiBiase. Within a couple of weeks, DiBiase would turn babyface and start an angle with Killer Karl Kox.

Roberto Soto finished up last week. It appears his last date in the territory was 9/10 in Jackson vs The Alaskan. From here, he went to Mid-Atlantic. He stayed there for about nine months, then came back here for a very brief stay before going to Georgia.