- September 13, 2019
Our coverage of 1961 continues with a look at the week ending September 17th: all the top tag teams do battle in various towns, Sputnik Monroe stumbles a bit in his quest to become a top contender to Danny Hodge, Great Antonio performs a unique feat of strength in New Orleans & more! 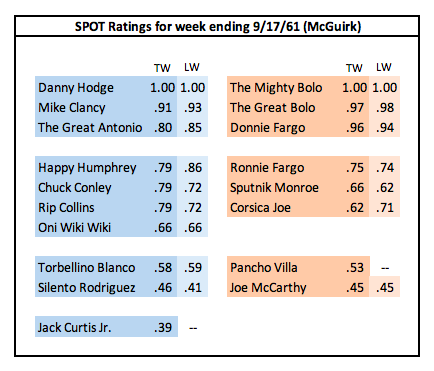 Notes/Analysis: Donnie & Ronnie Fargo were being hit from all sides this week as they faced a variety of top tag teams. They lost to Danny Hodge & Mike Clancy in Shreveport to begin the week, then defeated Great & Mighty Bolo in Little Rock. They were booked to face Hodge & Clancy again in New Orleans, but results from that show indicate they did not appear (nor did Clancy). They finished the week with a victory over The Scufflin' Hillbillies (Chuck Conley & Rip Collins) in Oklahoma City.

Other tag team battles in the territory saw Great & Mighty Bolo defeat the Scufflin' Hillbillies in Tulsa. Two nights later in Springfield the Bolos faced Happy Humphrey & Torbellino Blanco. They won the two out of three falls match when Great Bolo pinned Humphrey after a series of (probably loaded) headbutts, but the heels continued their attack on Humphrey afterward, leading the referee to reverse the decision. The Bolos and the Hillbillies also faced one another in Wichita Falls, but results for that card are not available.

The only title match of the week saw Danny Hodge successfully defend the NWA World's Junior Heavyweight title against Corsica Joe in Monroe. With the top spots on the card occupied by tag teams, there weren't many viable singles opponents at the moment for Hodge. Sputnik Monroe was trying to put together a string of victories and emerge as a top foe for Hodge. He bookended the week with victories over Joe McCarthy in Tulsa and Oklahoma City. In between those two wins, however, he found himself going to the loser's end of the pay window in Little Rock and Fort Smith, losing to Mike Clancy by disqualification in both of those towns. Clancy, a former World's Junior Heavyweight champ in his own right, was not only an ally of Hodge's but also a gatekeeper of sorts. If a heel wanted to earn at a crack at Hodge's title, he had to get through Clancy first.

The Great Antonio continued his run here; both he and Humphrey were somewhat protected in how they were booked. They were here too long to be considered special attractions (Antonio's run lasted 6 weeks, Humphrey's lasted 7), but were booked much in the way of how a Haystack Calhoun or, years later, Andre the Giant, was. To help promote Antonio's appearance in New Orleans on Thursday, they had him perform a unique feat of strength two days earlier outside the Municipal Auditorium. Antonio pulled three buses with only a rope around his shoulders. This was nothing new for him. In 1952 Antonio made it into the Guinness Book of World Records by pulling a 433 ton train along a 19.8 meter track in Montreal. In 1960 he performed the bus stunt with four buses, each of which was filled with passengers.

Jack Curtis Jr. returns to the SPOT ratings this week after not being booked on any cards last week. It should be noted that while he was advertised this week in Baton Rouge and New Orleans, he actually didn't appear on either of those cards. Given the number of wrestlers that did not make those shows (remember earlier I mentioned the Fargos & Clancy), there were likely some transportation and/or weather issues. A newcomer this week was Pancho Villa, who came in from Gulf Coast. Villa had been here previously in 1958 using the name Roberto Pico.

Exiting the territory was Hassan Bey and Bob Boyer. I don't have any information on Bey's whereabouts after leaving here, though he does return in December. Boyer went to the Central States territory. He would have a couple more runs here over the next ten years. In the early 70s he started using the name Chief Bobby Bold Eagle.