- September 04, 2019
Our coverage of 1975 continues with a look at the week ending September 7th: Dick Murdoch turns babyface, a newcomer with ties to a famous neurosurgeon / accused murderer / inventor of the mandible claw & more! 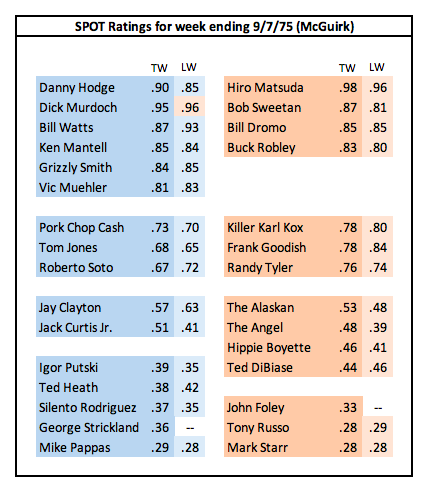 Notes/Analysis: The Dick Murdoch babyface turn took effect this week in many of the towns. He faced Buck Robley in loser-leaves-town matches in Tulsa and Shreveport. Murdoch won in both towns, which would lead to Robley placing a bounty on Murdoch in future weeks. In Jackson, Murdoch faced Terry Funk in a title vs title match with Murdoch's North American title against Funk's International Heavyweight title, which was a title recognized in Amarillo. In Chalmette, Murdoch was advertised to team with Killer Karl Kox against Bill Watts & Danny Hodge; however, Robley actually teamed with Kox. Murdoch was actually wrestling in Amarillo that night (facing Bobby Jaggers), so I assume that Murdoch "no-showing" Chalmette became part of the storyline leading to Murdoch's face turn in Chalmette and the surrounding areas (which included New Orleans).

Hiro Matsuda defended the NWA World's Junior Heavyweight title against Danny Hodge in Tulsa, Shreveport and Baton Rouge, and against Pork Chop Cash in Greenville. In Baton Rouge, Hodge won by DQ. The match in Shreveport seems to have been a time limit draw, though the newspaper report doesn't exactly make that clear.

Two newcomers this week were John Foley and George Strickland. The British-born Foley is probably best known for his run as a manager in Stampede (as both John Foley and later as J.R. Foley), but in the mid-70s wrestled for several territories in the U.S. He had been in Florida prior to coming here. Strickland was nearing the end of his career at this time; he had started wrestling back in 1942 for Al Haft. He might be best known for getting Dr. Sam Sheppard into the wrestling business. Sheppard is the real-life person that the TV show (and later Harrison Ford movie) The Fugitive was based on. Sheppard wrestling was basically a publicity stunt based on his infamy at the time. Sheppard also married Strickland's daughter. The most important aspect of Sheppard's wrestling career may have been his creation of a unique submission hold called the mandible claw, which was of course later used by Mick Foley.

Rip Tyler was not booked on any cards this week, so I removed him from the SPOT ratings. He worked at least one show for Gulf Coast this week, so he may have just gone down there for a week or so. He returns here next week.