- September 30, 2019
Our coverage of 1982 continues with a look at the week ending October 3rd: a loser leaves town tag team match could spell trouble for Akbar's stable, but he seems to have a (Ugandan) ace up his sleeve, masked wrestlers begin to feud with one another & more! 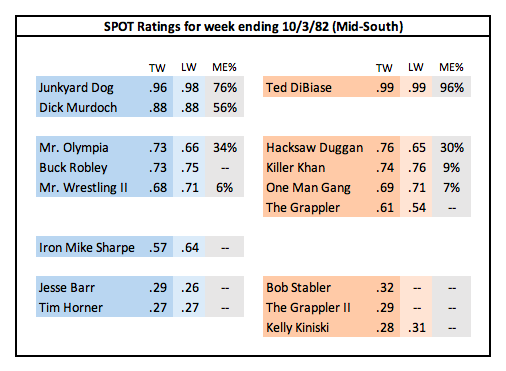 Notes/Analysis: I only have records for two house shows this week, and none of the other major sources for wrestling results have any other house shows listed. They did run a TV taping on Wednesday in Shreveport, and we can assume they ran New Orleans on Monday. New Orleans results and lineups from this era are notoriously hard to come by. While we generally believe the territories ran a full slate of cards year-round (with the exception of a reduced schedule around Christmas depending on how the calendar falls), I suppose it's possible they scheduled a few breaks where they didn't run any shows for a few days. But part of this project is to get as complete data as possible, so I'll keep trying to dig up any info on other cards that may have taken place this week.

Baton Rouge was headlined by Ted DiBiase defending the North American title against Dick Murdoch. Also on the card was JYD vs Hacksaw Duggan and a match between the teams of Buck Robley & Iron Mike Sharpe and Killer Khan & One Man Gang where the losing team must leave town. Debuting on the undercard against Jesse Barr was Kamala, who came in just for this show and the TV tapings the next day. He had been wrestling in Memphis, but went to Florida for a week and then did these two shows before going back to Memphis to finish up his run there. With a new "monster heel" about to come in, that may give you a hint as to which team lost the loser leaves town match.

Lafayette, which was an afternoon show that started at 3pm, was headlined by a no disqualification match for the Mid-South Tag Team titles as champs Junkyard Dog & Mr Olympia took on DiBiase & Duggan. Other major matches on the card were Robley vs Khan and Mr Wrestling II vs One Man Gang.

As mentioned last week, Tony Anthony was wrestling on some house shows as himself and on some as Grappler II. Starting this week, I'm only listing him in the SPOT chart as Grappler II. While they generally worked tag team matches at TV tapings, they were usually in separate singles bouts on the house shows. Grappler II would wrestle (and generally win) a prelim match while Grappler I (Lynn Denton) would go against Wrestling II further up the card. In some of those matches, we can assume Grappler II interfered on behalf of Grappler I, and that seems to set up some tag matches down the road with Wrestling II getting help from yet another masked wrestler.

The only newcomer to the house shows this week was Bob Stabler, a wrestler that I don't have much information on. I was able to find his name on some ICW (Poffo) cards in 1981 and some South Carolina indie shows in 1983.